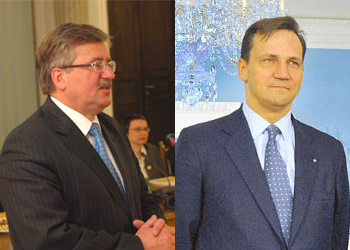 Today, Poland’s leading political party, Civic Platform (PO), began a conference to determine their choice for a presidential candidate in this year’s elections. As we reported earlier, the leading names at the moment are Radosław Sikorski and Bronisław Komorowski. While many pundits speculated that today’s meeting would decide who will run from PO, Prime Minister Donald Tusk has decided to leave the choice in the hands of the people.

“After a meeting with the board of PO, I have recommended that the choice of presidential candidate will be decided by the primaries,” PM Tusk told reporters. This means that the PO candidate will not be announced until the end of March. The prime minister assured that the public will know the candidate’s name by Easter.