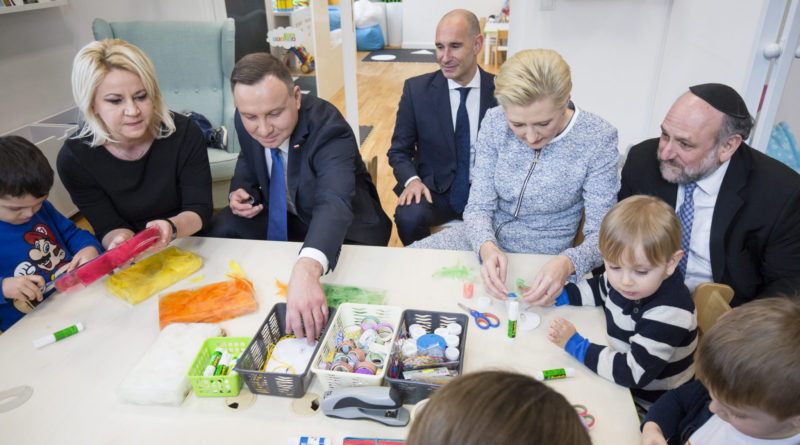 The visit comes at a fraught time in Polish-Jewish relations in the wake of an amendment signed into law by Duda earlier this month which criminalizes the controversial phrase “Polish death camps” and other language which broadly implicates Poland of guilt for the Holocaust. The move has sparked widespread condemnation, with Israeli Prime Minister Benjamin Netanyahu calling it an “attempt to rewrite history.”

[Read more about the controversy around the amendment.]

The conflict has become increasingly ugly – for example, with popular right-wing Polish weeklies Do Rzeczy and Najwyższy Czas! publishing antisemitic illustrations. The February 25th cover of the former magazine bears the headline “ATTACK ON POLAND: How to stop this brutal wave?” with a Star of David overlaying it.

In a 15-minute speech at the JCC, Duda condemned such reactions. “Nothing worse can happen than people who survived the Holocaust being punished for their testimonies,” he said. “This is unacceptable.”

In his introductory remarks, JCC Krakow Executive Director Jonathan Ornstein expressed hope that the meeting would “put Polish-Jewish relations back on track.”