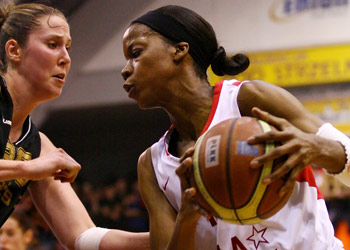 Wisła Can-Pack women’s basketball is through to the quarter-finals of the European women’s club basketball championships after beating MiZo Pecs on Wednesday night, 10 February, at home. The win in the third game of the best-of-three series did not come easily, as Mizo Pecs tried to carry over their momentum from their win against Wisła on Friday. Wisła now goes on to face the Czech team Frisco Sika Brno to vie for a place in the final four. The quarter-final berth is a first for the club.

While Wisła is struggling in the Polish Leauge, unable to break into the top four, their performance in the FIBA Women’s EuroLeauge has been nothing short of stellar, winning all but one of their group-phase matches. They can now expect support from all over the country as the only Polish club remaining in the tournament, after Lotos Gdynia dropped two in a row to Spartak Moscow by large margins. The Muscovite superclub is the tournament’s team to beat, having won three consecutive championships.

The ladies from Reymonta played in front of their largest crowd of the season, with viewers packed into their modest building, Hala Wisła, near Krakow’s Błonie. The size of the arena is expected to become a problem as the tournament continues.

The game was tight through the first three quarters, with MiZo Pecs leading by a single point at the end of the third. In the final five minutes, however, Wisła took command of the game, outscoring Mizo Pecs in the fourth quarter 21 to 8.

Wisła will play next against Polish league leaders Lotos Gdynia in Gdynia, and begin their next EuroLeague series at home on 23 February against Frisco Sika Brno, EuroLeague champions in 2006.