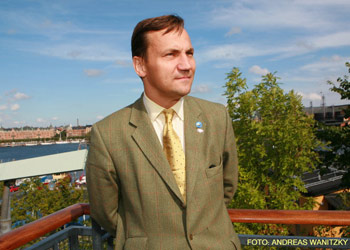 A poll conducted by the Gazeta Wyborcza daily has placed Foreign Minister Radosław Sikorski as the forerunner if he decides to run for president this year. According to the poll, Sikorski received 26 percent of the vote, compared to 22 percent for incumbent President Lech Kaczyński.

In late January, Prime Minister Donald Tusk announced that he will not be running for president in the 2010 elections. That announcement left speculators asking who will be nominated from Tusk’s Civic Platform (PO) party as the presidential candidate. This question was partly answered by Tusk when he suggested both Sikorski and Bronisław Komorowski, the vice-chairman of the party and the Sejm Marshal. However, in the same poll, Komorowski tied with President Kaczyński, with both receiving 21 percent of the vote.

The elections are set to take place in October of this year.