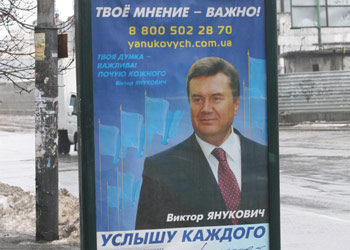 Russia-friendly candidate Victor Yanukovych held a narrow lead Monday in a presidential election that seemed likely to spawn a court challenge from his opponent.

There was no sign, however, that Prime Minister Yulia Tymoshenko was following up on her vow to bring protesters onto the streets in the event of defeat.

A Yanukovych victory could restore much of Moscow’s influence in a country that has labored to build bridges to the West. It would close a chapter in the country’s political history that was been defined by the 2004 pro-democracy Orange protests…