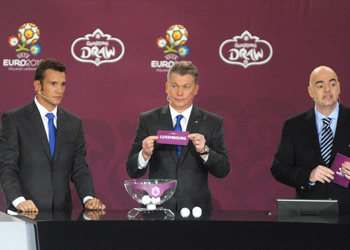 Warsaw’s Palace of Culture was the grand setting of this Sunday’s qualifying group drawing for the Euro 2012 tournament. The draw formed nine groups, which include six sections of six teams and three of five.

Present were UEFA president Michel Platini, general secretary Gianni Infantino and director Martin Kallen. In a press conference ahead of the draw, Mr. Platini stated: “It’s a historic occasion. It’s the first time Ukraine and Poland will organise such a large international competition in the biggest sport in the world, so we decided on the slogan ‘Creating history together’.”

The ceremony included Polish Prime Minister Donald Tusk, who told the assembled audience, “We have waited for this day for three years, ever since UEFA awarded the hosting of the European Football Championship to Poland and Ukraine.

“The Euro 2012 infrastructure is being constructed, including stadia, airports, motorways and hotels,” Tusk continued. “Just like in football, we have based our Polish-Ukrainian cooperation on partnership, ambition, mutual trust and determination. It really is a good example of teamwork. I am looking forward to seeing you all at Euro 2012 in Poland and in Ukraine.”

The groups are as follows: