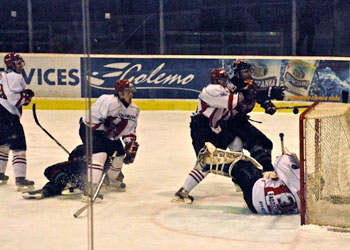 Approximately 1,600 fans turned up on Tuesday night to see Cracovia Comarch show its mettle against GKS Tychy. Tychy’s backup goaltender Witek was unable to cope with Cracovia’s shooters, giving up five goals, including three over a stretch of eight minutes in the second period. Cracovia’s Rafał Radziszewski was in top form, making a number of highly dramatic stops, and keeping the puck out during twenty total minutes of penalty-kill, including more than 40 seconds of five-on-three advantage for Tychy in the third.

Cracovia captain Daniel Laszkiewicz and his brother Leszek had a good evening, scoring a goal a piece, as well as celebrating Daniel’s thirty-fourth birthday. As the game came to a close, with Tychy clearly exhausted and unable to keep the puck out of their zone, the fans sang the traditional Polish birthday song “Sto lat, sto lat…” continuing as the buzzer sounded.

Laszkiewicz said after the match: “What’s important is that the team banked three points. It worked out though, that I beat GKS’s goaltender and I’m very pleased about that. In the end our squad yesterday scored four goals and that was an extra present. But the best one I got was from the fans.”

When asked about the birthday song he said: “Tears welled up in my eyes. I thank all the fans for that. It was really nice and very moving.”

The game clinches home ice advantage for Cracovia throughout the play-offs.

Wisła Can-Pack decisively defeated MiZo Pecs of Hungary on Tuesday night in front of an ecstatic full house of 2,200 fans, whose deafening chanting and singing filled their arena on ul. Reymonta.

The first half that looked reasonably tight, finishing at 43:37, but Wisła pulled away after the break by shutting up shop defensively. They allowed only 16 points for the remainder of the game, while scoring 38 of their own. MiZo’s coach Akos Fuzi said afterwards: “Our problem tonight was lack of rotation … there was too little movement off the ball, so we didn’t have enough chances to score.”

It was Wisła’s foreign players’ night to shine, as the scoring was led by American centre Janell Burse (17), Israeli guard Liron Cohen (16), and Brazilian forward Iziane Castro Marques (13). The final score was 80:53.

Cohen said of the fan support: “Tonight we showed how important it is to take advantage of your home court advantage. The atmosphere that the fans created was unbelievable. They really were the sixth player tonight and it was a great pleasure to play in front of a crowd like that.”

Adam Małysz, the “Eagle of Wisła”, continues to show improving form. Just a little over a week before the Winter Olympics, he took second place in Klingenthal, Germany, with 257.2 points. Simon Ammann, the World Cup leader, took first with 263.9.