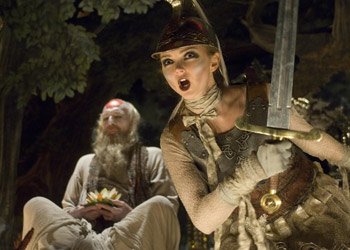 As a devoted fan of Terry Gilliam, this was a must – a new film from a visionary director after what seems like forever since his last feature, Tideland, from 2005. And even though after watching The Imaginarium of Doctor Parnassus it was clear that it will not top some of the more significant movies coming from that director, it’s a fine film and a great addition to Gilliam’s filmography.

The most intriguing and probably the most memorable aspect of Parnassus – instantly winning our attention – is the unique use of scenery and props and the way they enrich the tale. And while I’m quite positive it may not appeal to everyone, those familiar with Gilliam’s other works, such as Time Bandits or Brazil, will undoubtedly recognize certain elements of his unique style, combining retro or fable-like contraptions with a modern, even industrial context. The result not only makes Gilliam’s movies distinctive, but also gives the audience this peculiar feeling of freedom and comfort; his made-up world is so weird that we can’t help but feel released from the duty of comprehending its nature, thus staying pure and focusing on the plot without any unnecessary assumptions. All of this we find in Parnassus, and even though it relies much more on computer-generated special effects than any of Gilliam’s other films, their use is very sophisticated, and subtle enough so that the audience can follow the plot without getting distracted by eye candy. The movie also combines a few different narrations and environments, but since it handles them quite skilfully the setup is consistent, convincing and a pleasure to watch.

But what kind of movie is The Imaginarium of Doctor Parnassus anyway – and what kind of story lies behind it? To put it simply, it’s a rather light fable/morality tale that draws from mythology and modern literature – the works of Bulgakov and Goethe immediately spring to mind. Its story builds upon the popular theme of a man making a pact with the devil. Just like Faust, Doctor Parnassus – granted with the gift of immortality – travels through the ages becoming, as time passes, more and more redundant and incapable of understanding the changes that occur around him. The characters that propel the story are rendered with a certain amount of grotesque exaggeration – still, they seem to hold a lot of subtle nuances that let them develop along with the plot.

All things considered, the film carries quite a lot of symbolism and cultural references, amplified by uniquely drawn characters and visual effects. Still, I could not help but think of it in the way its very title suggests – an imaginarium – a dream-like trip that echoes and indulges our own desires and fears, without a particular need for assigning rational meaning to the visions. Terry Gilliam fans are already familiar with this; if you feel this kind of cinema may be your thing, you should give it a try.