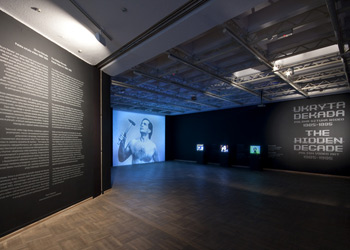 The video art scene emerged in Poland relatively early in comparison with some other Soviet bloc countries. It resulted from the activities of the Workshop of Film Form (WFF), a multidisciplinary atelier established in the early 1970s. Amongst its members were Józef Robakowski and Wojciech Bruszewski – the latter passed away last September at the age of 62 – who soon decided to adopt video and experimental photography as their favourite mediums to work with. It can hardly be seen as a coincidence that the WFF was set in Łódź, a place immediately connected with the renowned Film School that nourished many talents behind the camera: Andrzej Wajda, Roman Polański and Jerzy Skolimowski, to name just a few.

After debuting last June at the Wrocław Media Art Biennale, the collective show “The Hidden Decade: Polish Video Art 1985-1995” has now opened in Krakow. The exhibition, created by Piotr Krajewski, the chief curator of the WRO Art Centre, displays around 30 video screens lit in a sombre fashion that expresses isolation. Most of the works come with headphones and placards in English. Visitors are immediately enveloped in an atmosphere that seems to reflect the dark mood of the nation and its artists in the wake of martial law, which was announced on public television in the bitter winter of 1981.

A new generation of artists, including veteran Robakowski and documentary filmmaker Piotr Bikont, quickly retook possession of the very medium used publicly to declare the “stan wojenny” (in Polish “the state of war”) as a reaction – but not only – to the dark period to come. Kino to potęga (literally “Cinema is Power”) is the title of Robakowski’s video, which shows the artist himself bare-chested, posing like a ridiculous dictator, brandishing domestic items such as a power drill or washing powder. His works, along with the installation Altar (1994) by Jan Brzuszek, make use of video devices in order to sculpt the space around them, echoing the style of Korean-born artist Nam June Paik.

This ironic attitude also characterises the playful performances of Igor Krenz and Wojciech Zamiara. Krenz’s absurd but at the same time logical games include “Heath Robinson” contraptions aimed at breaking bottles and light bulbs. Several videos recorded with amateur video cameras convey the artists’ need to explore physicality beyond the limits of their bodies. Performances created by Łódż Kaliska (a group founded in 1979 that is still active today) seem to express a similar desire to test the laws of physics. From this point of view, the works of Adam Rzepecki and Marek Janiak, who are both members of Łódż Kaliska, are intimately linked to the experiments of Bruce Nauman and more broadly to the worldwide body art scene.

The exhibition has the great merit of displaying the interesting comparisons between Polish artists initially isolated by a repressive regime and the works of their colleagues in Western countries. Although artists in the East invariably had to be more clandestine in their approach, one can indeed say that “Video was power” on both sides of the Iron Curtain.

“The Hidden Decade” runs until 14 February at Bunkier Sztuki, Plac Szczepański 3a.