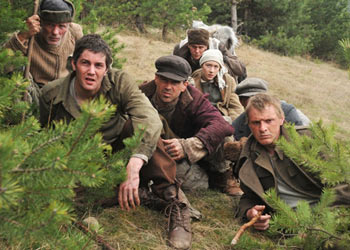 Filming has completed on The Way Back, an epic World War II saga based on best-selling book The Long Walk. Australian director Peter Weir, who has hits such as The Truman Show and Master and Commander under his belt, shot the feature in Bulgaria, Morocco and India.

The Way Back focuses on the escape to India of a group of inmates from one of Stalin’s Siberian gulags. The story, adapted from Sławomir Rawicz’s acclaimed book, has entranced readers across the globe.

Whilst the high drama of the story seems perfect material for a Hollywood flick, certain aspects of the book have been questioned of late. Sławomir Rawicz, the son of a landowner, was one of thousands of Poles imprisoned by the Soviets in WWII. However, historians claim that his odyssey was partially fabricated, and that he left the Soviet Union in official units freed by Stalin under the terms of the historic Russian Amnesty. In May 2009, another veteran called Witold Glinski who, like Rawicz, settled in the UK after the war, came forward to say that it was his story that was represented in the book. Peter Weir, who penned the screenplay adaptation himself, has thrown in a part for Colin Farrell as a tough, tattooed Russian inmate. The Way Back is now in post-production.