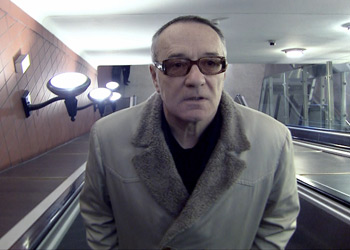 Acclaimed British music journalist Chris Salewicz was invited to Poland to narrate Beats of Freedom, the award-winning new documentary by Wojciech Słota and Leszek Gnoiński. With both a Polish and a musical background, Salewicz soon found himself on a powerful voyage of discovery.

Krakow Post: You grew up in England. How did you first get into music journalism? It must have been an exciting time to be at the NME, 1974-1981.

Chris Salewicz: I got into music journalism because I wanted to be a journalist. I noticed that in the music press, writers got a lot of space and quite clearly considerable freedom with their copy, and also seemed to have many opportunities to travel. I was a big music fan: the Beatles were the first group I ever saw, and I had attended Leeds university, which had legendary acts on – I was present at The Who Live at Leeds, for example. After writing some articles for a monthly magazine called Let it Rock – quite a highbrow affair – I met people from the NME and began to write for the paper in 1974. Although the period until 1976 was somewhat moribund creatively – one of the reasons reggae emerged as an alternative music – things changed a lot with punk: I remained with the NME until 1981, and it was a very creative period. Clearly, this was a golden time. However, as my friend Neil Spencer, the former editor, said to me the other day, “What people don’t want to hear about the NME is that everyone worked very hard indeed!”

KP: What inspired you to come to Poland to do this film?

CS: Going to Poland for the first time in 2008 was like going to the other side of the moon: I had no idea what to expect, and because of my father, a navigator in the Polish Air Force, it had profound resonance for me. However, on arriving in Krakow – the first city I visited – I immediately appreciated I was in a modern European city, and that life in Poland was similar to others in the rest of Europe. So I was delighted to become involved with the Beats of Freedom team – I had always known there must be a musical subculture in Poland, even during the years of communism, and I wanted to find out about this.

KP: What were the most memorable experiences/encounters during the making of the documentary?

CS: One of my most memorable experiences of my first visit to Warsaw last March was how unimaginably cold it was – it had been 72 degrees when I left London, a surprise heatwave. I especially enjoyed speaking with Tomek Lipiński, whose intelligence and lateral overview taught me much; Mirek Makowski also gave me huge insights. But the most memorable experience during the filming on that occasion was the visit to the Warsaw Uprising museum, which I found deeply disturbing.

KP: How do you feel bands like Maanam compare with their more famous Western punk peers? Do you think they deserve wider recognition?

CS: Clearly, plenty of Polish acts stand up well next to groups from other nations. I particularly like Maanam, as a matter of fact, and also Brygada Kryzys, Kult and Dezerter. As I don’t speak Polish, there is inevitably a language problem for me, however.

KP: Do you think the music industry in Poland is facing the same crisis that the film industry went through when the communist regime collapsed, in that while once there was funding for the arts but little creative freedom, now there is full creative freedom but little funding?

CS: Yes, I’ve heard this argument about the Polish film industry. But the present situation is a global problem, exacerbated by the belief that music on the Internet should be free. I’m afraid that I think this is madness: if no-one is paying, how can it work? Sorry if that sounds old-fashioned…

KP: You’ve just published a major biography on Bob Marley. That must have been a rewarding project to work on.

CS: It was certainly a rewarding project to work on the Bob Marley book. Immersing yourself for three years in that life and culture could hardly fail to be otherwise: as we all know, there was an endlessly, effortlessly poetic element to the life of Bob Marley and his milieu that can hardly fail to be uplifting; and his almost gangster-like efforts to survive add a frisson that is an ever controversial counterpoint.

See also: Rock Against the Bloc