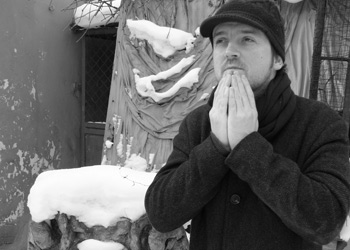 Although something of an incurable wanderer, writer James Hopkin can’t help returning to Krakow. He first fell under the spell in 1998. His debut novel, Winter Under Water (Picador), which is partly set in Krakow, was described as “a seductive and irresistible read” in the Independent on Sunday. It has since been translated into Polish as Zatopiona Zima (Znak). The appetising Say Goodbye to Breakfast! is set to follow. More info at jameshopkin.org.

James Hopkin: The servants’ quarters in Wawel, or a flat on ul. Kanonicza.

JH: To abdicate before they discover I’m an impostor.

KP: And what, in this city, seems to represent a degree of overkill?

JH: Statues, generally, are not good things, except perhaps the one of Boy-Źeleński in the planty, and even that has been glazed by pigeons. Possibly there should be one dedicated to all the people who have to work in kiosks during the winter. Passers-by could leave blankets and bowls of barszcz at the foot of the frozen effigy.

JH: U Stasi, U Babci, Botanica, Nowa Prowincja (upstairs), Cafe Zakątek, and one or two secret places in Kazimierz and Podgórze. I’m always looking for somewhere new, and quiet, to read and scribble.

JH: My bed. Warsaw. The woods. Or Berlin.

JH: For me, swimming and steam-rooms/sauna. I swim every other day then sweat it all out – a great way to defrost your lungs and limbs. It is also a good way of getting rid of the beer dregs you swigged at dawn from a bucket in Piękny Pies.

JH: I was keen on pierogi but I’ve weaned myself off them, except for the sugar- and cinnamon-soaked indelicacy of the apple pierogi at U Stasi. A treat indeed on a Friday after fish.