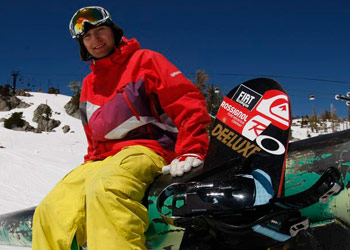 As the world’s eyes turn to Vancouver this February, Krakow’s students will have a special reason to pay close attention: one of their own, Michał Ligocki, of Krakow’s Academy of Physical Education and a member of Poland’s premier snowboarding clan, will be riding for gold in the men’s half-pipe.

The Ligocki family have been in the spotlight in snowboarding in Poland and internationally for several years now. Michał and his brother, Mateusz, both competed in the 2006 games in Turin, along with their celebrated cousin, Paulina Ligocka, who carried the Polish flag in the opening ceremonies. Michał and Paulina are set to compete in the coming Winter Games.

“My brother Mateusz used to compete in the half-pipe and we would be in the same events, but it was never a problem for me and I didn’t subject him to any kind of special rivalry.” Michał told the Krakow Post shortly before beginning his training for the Olympics in Davos, Switzerland. “Since the 2006 Olympics in Turin, Mateusz only rides in the snowboardcross, and so we’re not competing with each other, which is kind of a shame because it was great going to events with him.”

Aside from the snowboarders, other members of the family include competition judges, snowboard jump designers and trainers. “Paulina’s brother Szczepan used to compete too. He was in the Polish half-pipe championships in… I think 2005. The top three places in the men’s were all my family: I was first, Szczepan second, and Mateusz was third, and Paulina took first in the women’s,” he adds with a sheepish grin. “The next day was the big air event, and I won and Mateusz came in second, and Paulina was first in the women’s, so out of twelve medals awarded, the Ligockis took seven.”

Michał and his family hail from Cieszyn, a town divided by the Czech border in the Beskid Śląski, and only a short drive away from the town of Wisła, home to Adam Małysz, Poland’s legendary ski jumper.

At 24, Michał is the youngest of the Ligockis on the professional winter sports circuit, and his youth and relatively small stature have earned him the nickname “Brelok”, meaning “pendant” or “keychain”.

“Yeah, it’s a funny nickname,” he says. “I used to be so little that my snowboarding buddies said they could hook me onto a zip pull or a keychain. I’m still only 176 cm tall (5’ 9”), but when I was little, I was really little.”

Not that he has let his size get in the way. Michał has been shredding since he got his first snowboard as a gift from his brother when he was twelve, and gradually went from being a casual rider to a serious one. “It wasn’t like there was some moment when it changed all of a sudden, but as my skills developed I started going to more and more competitions, winning better and better places, and then I started getting sponsors.”

That led to a string of Polish Championships and high placings at international competitions, including the 2006 European Cup that allowed him to compete in the 2006 Olympic Games, and a first place at the Universiade, also in Turin, in 2007. More recently he narrowly missed a place on the podium at the European Cup in Saas-Fee last October, taking fourth.

While Ligocki will be facing some very tough competition in Vancouver, including the returning American gold and silver medal-winning half-pipe riders Shaun White and Danny Kaas, he seemed characteristically at ease when the Post caught up with him. “I feel good. Really pretty normal,” he said, while emphasizing that he was looking forward to the special atmosphere of this year’s games. “In Turin we were staying in a tiny village in Bardonecchi, and this time we’ll be in the main Olympic village in Vancouver. Also, snowboarding is one of the most important events for Canadians, so there will be a bigger crowd and it will be a little more significant as an event.”

When asked about his plans for after the Olympics, he made it clear that he was looking forward to more challenges and more good times doing what he loves; “After the Olympics… hmm… I’m going to come home, wash my clothes, pack up and head out somewhere with my friends to ride boards. I’m also planning to make a documentary film about snowboarding in Bulgaria.”

I asked Michał what his secret weapon will be in Vancouver; his answer: “A hug from my girlfriend.”

You can follow Michał as he travels the world doing McTwists and Eggflips and on his blog, or see a the trailer for a film project he worked on last season here.