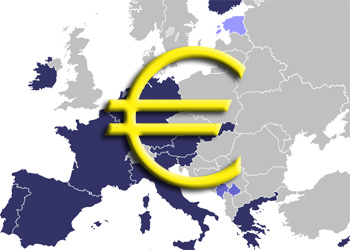 The Polish government considers the prospect of joining the European Exchange Rate Mechanism II (ERM II) – or eurozone – as a painful obligation. For an unprepared economy, entering a zone of constant excessive currency appreciation, as well as an internal struggle for meeting convergence criteria, this spells trouble.

In 2008, Prime Minister Donald Tusk declared that the Polish economy would be ready for adopting the common currency in 2012, leading the government to work out the “Roadmap for the Introduction of the Euro in 2012”, a document explaining the strategy on how Poland wants to meet the fiscal requirements of the European Central Bank (ECB).

In November 2009, Deputy Finance Minister Ludwik Kotecki expressed that during the second half of 2010 the ministry will publish the “National Plan for the Introduction of the Euro”. Minister Kotecki explained that the concept consists of two schedules. The first will describe actions that have to be implemented regardless of the date set for the adoption of the new currency. The second will have a conditional character, meaning that it will depend on the entry date, which the government has been unable to define as of yet. The responsibility for meeting the requirements of the schedules will make the specially established committees send recommendations to the cabinet evaluating the accuracy of the predicted date. The minister explained that these actions would come into force once the economic and political conditions are met.

Currently, Finance Minister Jacek Rostowski is updating a new convergence plan. The programme aims to present the actual shape of the Polish economy and describes the most urgent actions that will lead the government to meet the Maastricht Criteria. According to the Polish daily Rzeczpospolita, Poland only complies with the interest rate criteria (6.1 percent) and with the national debt level compared to GDP (less that 50 percent), yet the country exceeds the level of inflation (3.9 in lieu of 1.7 percent) and government deficit (3.6 in lieu of 3 percent).

In 2009, Brussels imposed the Excessive Deficit Procedure on Poland, hindering the country’s ambitions of joining ERM II, a standard EU practice for countries exceeding the fiscal regime. Under the obligations of this procedure, Poland is committed to cutting the ratio of the actual government deficit to three percent by 2012. Even if a country fails to meet this goal, access to the ERM II is still possible. The president of the National Bank of Poland, Sławomir Skrzypek, admits that fighting with inflation is not such a demanding assignment in contrast to the fulfilment of the fiscal regime issue. According to his forecasts, inflation in 2010 will decrease to 2.5 percent, which would be a good score. Inflation in Poland during 2007-2009 stood at 3.4 percent, remaining within the accepted limits.

The vice president of the National Bank of Poland, as well as its plenipotentiary for the adoption of the euro, Witold Koziński, announced that around the first half of 2010, inflation in Poland will reach the level of 2.5 percent and “until then other EU countries that are dealing with deflation now will enter the inflation level above zero and therefore we will be capable of complying with the criterion”.

The expensive fight with the financial crisis, marked by pumping billions of euro into EU economies, has been proven to cause severe problems within the public finances sector of the EU countries. In 2009, the average level of government deficit in the Euro countries reached five percent in terms of GDP. The limits agreed in Maastricht seem to be posing problems even for countries that treated their economies with additional care.

In the Annual Statement on the Euro Area 2009, the European Commission forecasts the rise of this index up to 6.5 percent. In 2010, national debt might increase to the level of 84 percent in terms of GDP, instead of 60 percent, as required by the Maastricht Treaty. At the end of last year, not one of the eurozone countries fulfilled all of the criteria of the Stability and Growth Pact. Furthermore, nearly every economy (except for Cyprus and Luxembourg) exceeded the limit of a three percent government deficit. Amongst the eurozone countries, Greece (in EMU since 2001) is the most alarming example. To Joaquin Almunia, Athens has been avoiding fundamental structural reforms for many years. The Head of the ECB, Jean-Claude Trichet, rejects the hypothesis of Greece leaving the eurozone or seeking recourse from the IMF. The Greek government ascertains that the programme of reforms that has been prepared will heal the economy, and in 2012 the government deficit of Athens will amount to 2.8 percent of GDP. In 2009 it was 12.7.

The three-year repair plan includes a withdrawal of tax breaks, a rise in tobacco and alcohol taxes, as well as income freeze in the public sector. Regardless of these efforts and political promises, experts doubt the Greeks’ capability of effective financial reforms. Some even suspect that in the worst-case scenario, Europe will have to let Greece participate in the €50 billion assistance fund created for countries facing big gaps in finances due to the crisis.

Countries entering the eurozone at a time when the financial crisis had been taking on alarming proportions, with more fragile and vulnerable economies, began to turn their economic paths in the wrong direction. When the euro enjoyed profits in relation to the U.S. dollar and British sterling, an illusory feeling of wealth was enjoyed by Europeans. Now, with many EU countries fighting against exceeding the ratio of convergence criteria, Poland should revise its plan of joining the European Monetary Union. Poland’s priority should be the aspiration for a rightful and completely official membership in the EMU. Only by fulfilling every requirement and undergoing a harmonious introduction of the new currency can the Polish economy see a real rise in stability in the future.