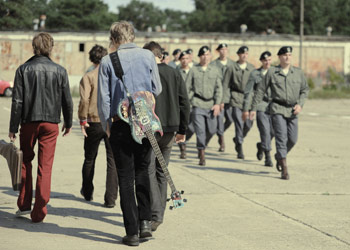 Two award-winning new films, Beats of Freedom and All that I Love (Wszystko co Kocham) (photo opposite) shine a light on the radical rock counter-culture that emerged in communist Poland. Szymon Urbański, who once jammed in a band called Trumna (Coffin), reflects on those heady days.

This year marks the 30th anniversary of the Solidarity movement and the beginning of the end for the Soviet system. For a few die-hard punks like myself, that watershed goes hand in hand with another phenomenon – the advent of a new wave in Polish rock.

In 1981, everybody still felt some sense of relief that we were living in the “merriest barracks in the camp” – our situation was far better than in, say, East Germany or Bulgaria. And then came the martial law period of 1981-1983. Life became dull, grey and disconsolate. The physical surroundings were ugly, the shops empty, and by nightfall the streets were dark and lifeless, people sneaking close to the walls in fear. The almighty police (named Milicja Obywatelska – Citizen’s Militia, to distinguish them from the pre-war “capitalist bourgeois” police) ruled supreme. You didn’t even have to be seriously involved in any kind of political opposition activity to have trouble. Some of my friends were expelled from school during martial law just for wearing electrical resistors on their shirts – a meaningful symbol of protest back then. And if you were old enough, there was the People’s Army waiting for you – the obligatory two-year stint broke the lives of many. We felt that this would last our entire lifetimes, that there was no future. 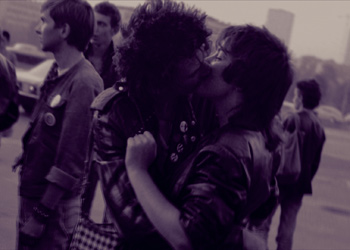 Previously existing groups, some of them, like Maanam, with a hippie background, promptly changed their style. Maanam (the original line-up of which originated in Krakow), with its charismatic singer Kora Jackowska, quickly achieved cult status. Their first two records shimmered with post-punk energy – imagine 1967 Jefferson Airplane with Grace Slick, transferred to the new wave era. Freshly formed groups like Republika – musically falling somewhere between The Stranglers and XTC, Lady Pank – heavily influenced by The Police – or Oddział Zamknięty (Mental Ward), all rocked with a rebellious spirit. During live concerts, Perfect would pause while singing the famous chorus “Chcemy być sobą” (“We want to be ourselves”), and the audience sang back “Chcemy bić ZOMO” (“We want to beat ZOMO”). ZOMO was the most hated formation of the Militia, basically anti-riot squads consisting of the worst thugs. Even Kombi, a soft pop group which still haunts disco clubs today, recorded a more serious rock LP in 1981.

Apart from those classic rock bands which gained mainstream popularity, counter-culture garage punk and new wave bands proliferated, such as TZN Xenna, KSU, Dezerter, Tilt, Śmierć Kliniczna (Clinical Death) or WC – the latter band’s songs are played by the boys in Jacek Borcuch’s new film, All That I Love. Arguably the most legendary and influential groups were Klaus Mitffoch and Brygada Kryzys (The Crisis Brigade). A BK record cover issued in the UK featured a collapsing Warsaw Palace of Culture and Science, the gift from “Uncle Joe” Stalin that to many was a symbol of Soviet oppression.

Soon the authorities realised that angry youth needed some sort of pressure relief valve, and the green light was given to rock festivals, the biggest and most famous of which was founded in Jarocin. In 1984, punk groups prevailed at Jarocin (or at least that’s how it seemed to me at the time), with a host of cool names like Made in Poland, Piersi (Tits), Moskwa (Moscow), Prowokacja (Provocation), Abaddon, Sedes (Toilet Seat) and Siekiera (Axe) – the latter the most radical and hardcore punk band in the history of Polish rock. While other groups consisted mostly of skinny schoolboys shrieking with a primitive exuberance, Siekiera’s frontmen were both six-foot-four and with menacing looks. The singer, Tomasz Budzyński (still active today as the leader of Armia) had a proper mohican, and the guitarist was bearded and bald (today it’s impossible to conceive how radical it was for a young person to be bald – in those days someone with a shaved head would either be an escaped convict or mentally ill).

But I digress. For three sunny August days, thousands of young people could feel a bit free. Nevertheless, it was a 1984 of a distinctly Orwellian kind. Censorship was overwhelming. You simply could not hear those bands on the radio. Tapes recorded live at Jarocin and other festivals circulated in the underground. Some lucky fans had current LPs sent by family members from the West. These were usually murdered beyond audible levels by endless copying. The same year, Maanam was officially banned from radio and TV, after refusing to take part in a concert devoted to Polish–Soviet friendship.

By the way, it’s interesting how the musical tastes of young people have changed over the years. I almost got lynched at a school party in 1985 after attempting to play a tape from Jarocin – 99.9 percent of my contemporaries listened to pop rock or disco. It took 10 years and Seattle’s grunge music scene to finally merge the once separate genres of punk, heavy metal and indie into today’s commonly accepted rock sound. If you listened to alternative rock in the 80s, you were an outcast, and had to live with it. And dress accordingly, which was by no means an easy task…

Putting the Boot in 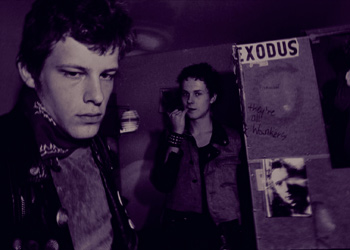 As in any other Eastern Bloc country, the centrally planned socialist economy resulted in constant shortages of everything – from energy supplies to consumer goods. Anyone wanting to dress fashionably had to overcome huge difficulties. This applied not only to elegant ladies, but rock fans as well. If you listened to blues or reggae, a flannel shirt and greasy hair would suffice. But for many that was not enough. The possession and wearing of any piece of military equipment or garment was prohibited. This fact created a high demand for army field uniforms called “moro”, particularly trousers. All you had to do was to go to any army garrison in your vicinity (and these were located pretty much everywhere across the country), approach a soldier guarding the back gate, and make a deal. Poor drafted boys willingly undermined the Warsaw Pact’s capability by selling items from magazines for a bottle of vodka.

Of course, no self-respecting punk rocker could go out without a leather jacket. I actually found mine on a garbage dump – quite in keeping with the punk spirit. It was a wretched shell without a lining, but after a little refurbishment and the daubing of some Clash lyrics on the back with white modelling paint, it was OK. Problems with clothes could have been solved with some creativity, but the search for proper footwear was futile – it was almost impossible to buy any decent shoes, let alone fashionable ones. It was not uncommon to see tough heavy metal goons wearing canvas sneakers or even sandals (sic!). Luckily, for some reason the city refuse management companies received some quantities of rugged work boots from brotherly Romania – these were an accurate copy of British parachute combat boots, tall, black, laced and stitched over the toes – utterly cool. Soon, enterprising garbagemen sold all stocks of these trendy bovvers to needy punk rockers, once again for vodka, which was the most common means of barter exchange back then.

So finally you were ready to hit the streets. You just had to beware of heavy metal fans and ordinary hooligans, who would beat up the punks, and vice versa. And of course, on top of them all there was the Militia, which, democratically enough, would beat up everyone. In fact, any average citizen of the People’s Republic of Poland could be harassed by the Militia at any time. Even the worst street patrol blockhead could sense the antipathy of the people, and that made them even more mischievous. God forbid if you looked different and had a weird hairdo. Once, my friend and I were halted by a patrol in mid-winter – I was wearing army boots, and my friend was sporting a pair of “moro” trousers. They stripped us both on the spot, before giving us a wallop with their batons. I walked home in socks, my friend in his undies.

Today, seeing children and elderly people alike wearing camouflaged trousers mass-produced in China, and young rock fans in all kinds of hip clothes – with boots straight from the shop – makes me feel almost like Einstein at the end of his life as he watched babies playing in the sand pit. Writing about all those hardships in 2010 reminds me of a Monty Python sketch – the one with four gentlemen in white tuxedos, drinking brandy and smoking cigars, trying to outdo each other about how miserable a youth they’d had, with the punchline: “Try to tell that to the young people of today – and they won’t believe you”.

On the other hand, during the summer holidays the sun was shining just like today, you enjoyed your first cigarette, first bottle of wine, first love, and life was generally beautiful, because you were young. And there we were, playing in garages, making a lot of noise with – to quote a venerable master – a lust for life, and that’s quite normal when you’re 17.

So what was it really like to live in a quasi-communist country back in the 1980s? The answer lies in a classic, and rather grotesque Russian joke: “It was like f***ing a tiger – both horrible and hilarious”. All in all, those were beautiful days – and I hope that they never return. Fortunately enough, the music of our youth will endure forever. 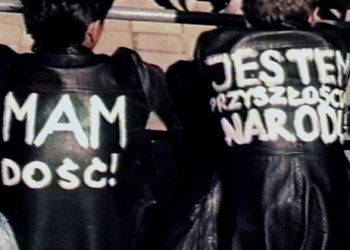