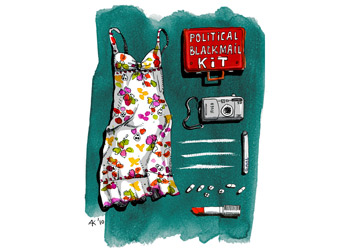 A man in a dress, caught on camera snorting white powder, is always funny. And when the man in question happens to be a sanctimonious lawyer and politician, celebrated for scripting unbearably pretentious films and given to pontificating about his always oh-so-politically-correct views, it really is hard to suppress a chuckle. On the other hand, perhaps the only thing more annoying than self-appointed “moral authorities” is the tabloids at their self-righteous, prying, hypocritical worst that indiscretions by the said “authorities” inevitably bring out.

So it’s hard not to feel ambiguous about the affair of Krzysztof Piesiewicz, senator for the ruling Civic Platform (PO) most famous as a scriptwriter for Krzysztof Kieślowski’s Decalogue and Three Colours (and, poignantly perhaps, The Double Life of Veronique). In December, the tabloid SuperExpress published a video showing him in the company of two, as a character in one of his films might say, ladies of the night. He was wearing a white dress with a floral pattern and snorting a white substance. And in an interview for the paper, Piesiewicz himself volunteered the priceless piece of information that a dildo was also in evidence.

Faced with criminal charges, Piesiewicz claimed the white substance which went up his nose on that occasion was strictly legal and was, in fact, a prescription medicine though, confusingly, he also explained that he had dabbled in cocaine in the past: “Understand me, understand the kind of people I was hanging out with, artists, filmmakers… it was in Italy, in the Netherlands”. Shame we never learn more about the kinds of parties Piesiewicz attended abroad (was Roman Polański there? – is just one question that springs to mind), but apparently even the company of all those “artists and filmmakers” wasn’t enough to lead him to don a dress: this special treatment he reserved for a woman he met in the car park of Warsaw’s Marriott hotel – probably Poland’s most notorious spot for streetwalkers – whom he proceeded to invite home. She came armed, so to speak, with a dress and “all those gadgets” (what gadgets? We only learn of one…) and a friend whose presence did not unduly surprise the senator when it was explained that she had unexpectedly dropped in on her just as she was about to leave. “I am quite normal,” the senator explained. “It was the first episode of this nature in my life.”

Imagine the jolt such a trusting soul must have got when he subsequently fell victim to blackmail. The shock to the system must have been severe indeed, prompting an apparent change in his whole outlook on life and human nature: where previously, it would seem, there was just about nothing that could arouse his suspicion, Piesiewicz now takes a much less benign view: “It was a premeditated action, they probably put something in my drink…”

With his track record as a defence lawyer, one can only hope the senator’s version of events will stand in court. Though, if it does, some of us will feel vindicated; namely, those who have said all along that the supposedly deep understanding of life he showed in writing Kieślowski films was really quite bogus, hiding a naïvely simplistic view of the world behind a thick smokescreen of pretension, verbosity and over-the-top music and imagery. Or is this being churlish?

What does seem churlish is to prosecute a man who has already paid a very high price for what were clearly his private acts. On the other hand, calls to drop the case against Piesiewicz on account of his record as a politician, artist and, inevitably, “moral authority”, seem misplaced. Surely, as a lawmaker who voted for jail terms for (to take but one example) possession of marijuana, he must be held to higher, not lower, standards than the rest of us? And his carefully cultivated public persona as a buttoned-up Catholic lawyer, ever ready to condemn in stern words people and causes hateful to the (broadly liberal) establishment, is an aggravating, not an extenuating circumstance in all of this.

Prime Minister Donald Tusk, whose party Piesiewicz represented in the Senate, took a characteristically charming (he does charm well, that Tusk) view of the whole sorry affair, saying that it must mean an end to the senator’s political career, thus refusing to join many of his underlings in desperately defending one of their own. On the other hand, Tusk expressed his sympathy for the personal tragedy of this, in many ways, admirable man.

Piesiewicz first gained fame by defending opposition figures before Communist-era kangaroo courts, something that was neither lucrative nor risk-free. And he represented the family of Jerzy Popiełuszko, a Catholic priest murdered by the secret police in a particularly brutal fashion for his brave resistance to the Soviet-backed martial law of the 1980s. This, indeed, was to cost him dearly when he found his mother dead in his apartment, murdered in an apparent copy-cat attack by perpetrators who to this day remain unknown.

It is a relief that at least the blackmailers in this case are safely behind bars. One day, perhaps, Poland will be a country where such blackmail is pointless, as people come to see other people’s snorting and dressing preferences as matters of no public interest. In supporting anti-Communist opposition, Senator Piesiewicz can claim some credit for bringing that day closer. But then there’s his more recent vote on marijuana possession…