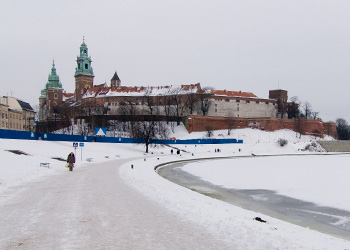 It’s been snowing. Other things may have happened but nobody can be sure since these things have immediately been buried under six feet of icy precipitation. There are strange humpy white shapes scattered all over the country that may or may not conceal fascinating news stories. For now, Poland’s television news programmes are left with two alternatives: extreme close-ups of politicians being duplicitous or stories about snow. They have mostly gone with the snow or, where possible, extreme close-ups of politicians lying about snow.

Us Brits tend to believe the Poles must know what they are doing when it comes to near-Arctic winters. For no logical reason, most Britons assume Poland is more or less glacial all the time. I suspect this has more to do with vaguely recollected Cold War propaganda about the chilly discomfort of living behind the Iron Curtain than a firm grounding in the meteorology of continental climates. Even when we find out this is not strictly true, we still expect Poles to be able to handle blizzards and similar snow-related hazards without a whimper.

At the first sign of the mercury heading south, the average Pole breaks out a winter outfit that wouldn’t look out of place on the Ross Ice Shelf. Old ladies take to wearing a second fur coat on top of their summer fur coat, and small children become weakly, struggling, sausage-shaped bundles of thermal insulation not to be seen again in their natural form until May. It all looks very professional and inspires confidence. Judging by every news programme I’ve seen over the past month, however, this confidence is misplaced. With every fresh gust from Siberia another part of the country’s infrastructure seizes up or collapses.

I’ve lost count of the number of times I’ve turned on the evening news to see another series of thrilling roadside interviews with drivers sitting in snow-bound traffic or with blue-tinged people at railway stations waiting for trains that were last seen a week ago on Thursday. I heard about a train that took 28 hours to get from Gdynia to Katowice. You could fly around the world in that time, assuming the airports were open, which they weren’t. It’s all very odd in a country where periods of subzero temperatures and deluges of snow have been occurring on a regular annual basis for several thousand years now.

The older generation will tell you the country has gone soft. When they were lads and lasses the snow was up to their eyebrows and people simply got on with it, they claim. You were more likely to see a news item about Jaruzelski’s Playboy collection than winter disruption, they continue. I have two theories to explain the apparent paradox of a nation that is getting better in every other way while getting worse at dealing with winter, one optimistic and one not so much.

The optimistic theory goes like this: under communism the infrastructure was at least as bad, if not worse, than it is now, but its failures under extreme conditions were simply not reported. Plus, there were far fewer cars on the road or people travelling by train anyway, so the failures were not as obvious to the general population. The less optimistic theory says that things really are getting worse; that infrastructure has been superficially prettified but is not as solid and reliable as it used to be. Either way, something is going badly wrong somewhere. Here’s my solution. Get all the ministers and executives responsible for this kind of thing together and send them on a nice train trip, say from Gdynia to Katowice, then see what they’ve come up with 28 hours later.