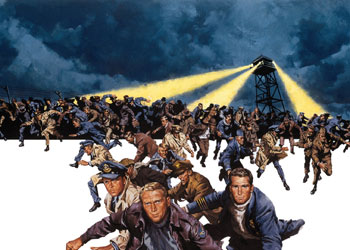 As the saying goes, “there’s nought as queer as folk”. There are history buffs with such a passionate interest in the Second World War that they dress in uniform and re-enact the cataclysm every weekend. And it is the belief of Briton Eamon Sadler, founder and chief operator of the latest hardcore re-enactment experience – POWescapes.com – that there are those among us who would like to be prisoners of war for a full week. That’s right, for $3,500 you can spend five days in a recreated Luftwaffe war camp located outside Warsaw.

According to the Oxford entrepreneur, the goal is to give people the chance to experience what it was like for Prisoners of War in these “Stalag Luft” camps. Everything in and around the camp is to be faithfully recreated in consultation with experts and veterans, so as to create an authentic experience.

“There are a lot of people who spend their free time involved in recreations of the Battle of the Bulge, Operation Market Garden and all the other major events of WW2,” says Sadler.

“I did a lot of research and I found that there is a thriving re-enactment community with hundreds of thousands of members all over the world, and many in Poland.”

Sadler added that there are even men who parachute into the countryside around Normandy dressed as British and American airborne forces and spend days living rough and eating military rations just as the men 65 years before would have done. “This happens every year!”

Considering the kind of popularity the aforementioned pursuits enjoy, it should come as little surprise that revellers would want to sit it out in a Nazi POW camp. Note also that adventure tourism, extreme sports and culture shock tourism (gangland and ghetto tours) support a multibillion-euro industry. Seemingly there is a sub-community of enthusiasts for every conceivable interest, and in most cases there is a market response, which the Internet facilitates.

But why would anyone want to re-enact a war? In his book, Confederates in the Attic, Pulitzer Prize-winning author Tony Horwitz wrote about America’s nostalgia for the Civil War and attempted to understand war re-enactors, and particularly hardcore re-enactors in America’s South. He spent time amongst people who would “crash diet” to achieve an appearance of “authenticity”, amongst other measures. In his account, Horwitz may have detected an important facet of the human condition: the longing to understand its history and failing this, mythologizing it through role-play. Though this account relates exclusively to the South’s latent passion for “the lost cause”, Horwitz perhaps stumbled on a more primal instinct: our innate attraction to violence and tribalism, or if you prefer, war. You need only tune in to cable TV to witness the volume of programmes about the Nazis on offer. Live action role-play seems an inevitable extension for a jaded generation that has both the time and the means.

The curious question is whether hardcore re-enacting is a civilised way of understanding our past by attempting to relive it, or something malignant: a perversion of capitalism and the Internet? Sandler calls it an education: “a history lesson for people interested in the war.”

“This is designed to be an educational experience, to provide those taking part with some degree of understanding of what it was like to be an Air Force POW during WW2. We want our ‘prisoners’ to go home with an enhanced appreciation of the sacrifices made by so many men during WW2, and a better understanding of what they went through during those years. Our intention is not to make a joke of the terrible things that happened to so many people in POW camps during the war. Our intention is to increase awareness and understanding of what they went through, and we will be supporting the museums, memorials and sites associated with POWs in Poland with part of the profits from this venture.”

How did POWescapes.com come to fruition?

“During and after my experiences in WW2 re-enactments,” Sadler reflects, “I formulated a mental plan to offer people a realistic WW2 experience.

“A POW camp was the obvious choice. It is static, it can be as large or as small as necessary (within reason) and it can be built very quickly and easily (as the originals were). But most of all, the ‘POW camp’ is one of the most famous icons of WW2 (thanks to movies like The Great Escape and the TV series Hogan’s Heroes).”

According to the website, should you decide to accept this mission, you will be asked to decide which air force you wish to join (RAF, USAAF, etc.) and which nationality you wish to be (British, American, French, Polish, Canadian etc). You will then be sent your cover story and your new identity, with complete papers, and you will be asked for measurements for your uniform.