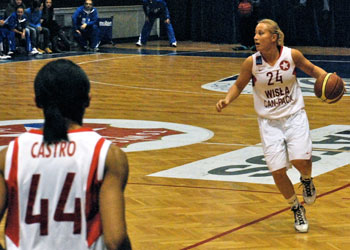 The Polish Men’s Handball side will return without medals after their long campaign to win the European Championships. While Sławomir Szmal was recognized by the European Handball Federation as the best goaltender of the tournament, his efforts were not enough to hold off the Croatians, who won 21:24 in a game marked by controversial referee calls and protests from the Polish coach. A special envoy from Polish President Lech Kaczyński expressed the President’s opinion of the match: “The referees didn’t help.”

The Polish team went on to lose to Iceland for third place and Croatia was subsequently beaten by France, now the European Champions.

SUCCESSIVE GROUPS OF OLYMPIANS TAKE OATH AND HEAD TO CANADA

The Polish Olympic Team has begun taking the ceremonial Olympic oath at the Olympic centre in Warsaw and departing for training in Canada as the Winter Games draw near. Of the 47 athletes who will be taking part in the games, the largest group yet took their oath on Sunday, consisting of the speed skating team.

The games are scheduled for February 12-28.

Wisła Can-Pack continues to perform well as they put together two victories with margins over 20 points last week. Tuesday will mark their first game in the Euroleague’s elimination phase against Hungarian MiZo Pecs. Wisła beat them in both of their matches in the group phase, but Pecs has been showing improving form, and won against Lille 94:42 recently.

The top Polish clubs are drooling over Michał Janota, the 19-year-old Feyenoord Junior talent who has been dubbed by the coach of Poland’s Juniors squad as the “Polish Messi”. Wisła Krakow has been reported to have made overtures, and Lech Poznań has moved into the forefront of negotiations after Janota turned down an offer from Lechia Gdańsk over the weekend.

Janota has indicated that he wants to return to Poland in order to train with the Polish National Side for Euro 2012. Six months remain on his contract with Feyenoord. He is presently on load to Excelsior Rotterdam, where he has scored 7 goals in 19 matches.

Krakow’s insomniacs, along with lovers of spectacle, fireworks, Buffalo wings, and computer-animated robot athletes, along with any local Bruce Springsteen fans, will be staying up very, very late on Sunday, 7 February to relish the all the gridiron action of the year’s crowning moment of American football, and probably desperately trying to keep a non-American interested while explaining its Byzantine rules. While this ceremony of Americana and bonanza of advertising will thrill a few, it is likely to appear to most Cracovians to be less a sport than a lot of men in shiny helmets shouting numbers while elderly Juve players throw yellow flags at them.

For those interested in the learning more about America’s favourite game, or wondering how an event timed precisely with a 60-minute clock can last four hours, check out the explanation at Wikipedia here.

Superbowl XLIII will be broadcast on ESPN America starting around midnight Sunday, 7 February, but the hype has already begun.