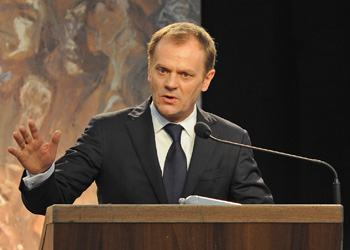 The prime minister explained that Poland needs a strong executive branch in order to continue to make progress. He praised the Polish economy but stressed that the country still has a long way to go in that department. “The key to maintaining good performance is strong executive power, strong enough to carry out this plan,” he stated.

Instead of running for the position of head of state, PM Tusk will continue to lead the government. He believes that in order for the plans of his party and the current government to come to fruition, he must retain his role as prime minister. He will continue to lead his party, Citizens’ Platform (PO), and reassured the audience that he believes that “this is a good course of events for Poland”.

This decision has left pundits wondering who will be the presidential candidate from PO. Today Gazeta Wyborcza mentioned Bronisław Komorowski, vice-chariman of PO and a former minister of defence, as a possibility, though no announcement has been made by PM Tusk yet.