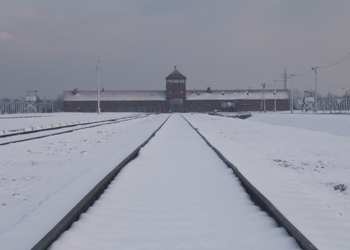 Sixty-five years ago today, the Red Army stormed through the gates of Auschwitz-Birkenau, the largest Nazi death camp and site of unbelievable horrors since its creation in 1940. And today, on the anniversary of the camp’s liberation, world leaders as well as over 100 survivors gathered in Birkenau to remember.

The ceremony began at 3 pm on the snow-covered grounds of the former death camp. After several introductory speeches, Marian Turksi, former prisoner B6448, told how “People today, especially young people, ask me, ‘Tell me what was the worst there?’ They expect I’ll say hunger. […] The worst was the demeaning – that you were not treated as a human being. Especially if you were a Jew, just because you were a Jew. […] So today, when people ask, what have you learned from that experience, what can you say today – if I were to sum it up in one word, it would be: empathy.”

Polish President Lech Kaczyński reminded the audience at the former concentration camp that “people brought this fate on other people.” He warned that “If it happened before, that means it can happen again.”

Prime Minister Donald Tusk attempted to relate the events of 65 years ago to modern times. According to the Polish prime minister, it is important to find hope in Birkenau today: “Hope that never again will a person be reduced to a number”.

“We are gathered here, Poles and Jews, in the crossroads of tragedy,” PM Netanyahu continued. “We sit in a warm tent and we remember those who shivered to death, and if they didn’t freeze to death they were gassed and burned. And we remember today that one third of the Righteous of the Nations, those who risked their lives, and more often the lives of their families, were Poles.

“As we stand here together to commemorate the past, we are helping to build the future of truth and hope for all the people represented here and for all mankind.”

He also stressed that the sins of the Holocaust must always be remembered, and deniers cannot be allowed to spread lies about the tragedy. He also mentioned the strength of Israel and its army today, which must be ready to defend the country, so “never again can evil hands be allowed to choke our nation”.

The ceremony was followed by a candlelit march to the Monument to the Victims.

The 27th of January marks International Holocaust Remembrance Day, a holiday designated by the United Nations General Assembly in 2005 to commemorate the victims of Nazi oppression.