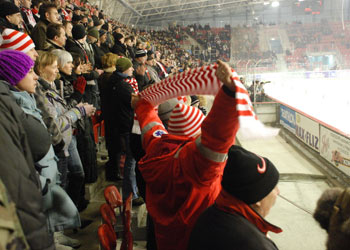 The visiting Cracovia Comarch ice hockey squad succumbed to GKS Tychy on Friday, conceding to Tychy a play-off bonus according to Polish Hockey League Play-off rules, and therefore any series they play against each other will begin 1-0 in favour of Tychy. Cracovia went on to score an astonishing 13 goals on Sunday against Akuna Naprzód Janów. They are to play their next match at home against Pol-Aqua Zagłębie on Tuesday at 18:00.

Krakow’s professional women’s basketball team, Wisła Can-Pack, is to play Hungary’s MiZo Pecs in the Euroleague play-off round of 16. The first round of the play-offs will consist of a best-of-three series beginning February 2nd at their home court on ul. Reymonta.

The Polish national side’s fortunes improved somewhat over the past week, as they defeated the admittedly weak sides of Thailand and Singapore 3:1 and 6:1, respectively, in the King’s Cup of Thailand. Participation in the event and the results have met with mixed reaction; optimists have regarded it as a much-needed opportunity to solidify the squad and put together some wins, as fans continue to revolt against the governing organization, the PZPN, which is widely perceived as entrenched, corrupt, and incompetent. Sceptics have slammed the trip as pointless and poorly planned, or even suggesting that it was an excuse for manager Franciszek Smuda to take his wife on a tropical vacation using public money.

The white-and-reds will face Bulgaria in Warsaw on 3 March.

Krakow’s Radwańska sisters had a tough week at the Australian Open, as Urszula Radwańska was subjected to a straight-sets drubbing (6:2, 6:1) in the first round Tuesday by Serena Williams, and older sister and 10th seed Agnieszka was upset 6:2, 6:2 in the quarter-finals Saturday by 17th-seeded Francesca Schiavone.

Sport Coming up on TV:

What’s Coming up Live in Krakow:

While no professional football is scheduled in Krakow, the Coca-Cola Cup, a nationwide secondary school student (13 to 15 years old) tournament begins this week. Five thousand teams, or about 50 thousand young footballers, are to participate, with four girls’ teams and six boys’ teams taking part in the final in June. Keep your eyes open – some of the kids from past tournaments now play professionally in Poland and elsewhere.