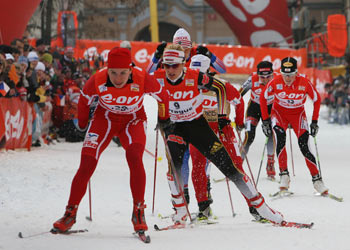 Polish cross-country skiing star Justyna Kowalczyk extended her lead in the World Cup standings over the weekend by winning the women’s pursuit in Rybinsk, Russia, where she started first and led from start to finish. Kowalczyk’s participation represents an aggressive World Cup strategy and strong confidence in her Olympic chances as many of the top skiers had chosen to skip the Rybinsk event in order to prepare for Vancouver. Kowalczyk won all the points available to her including bonuses, resulting in a total coup of 190 points for the weekend.

Kowalczyk is expected to be Poland’s top competitor at the 2010 Olympics in Vancouver. She is the defending World Cup holder, and currently leads the standings with 1,415 points, with Slovenia’s Petra Majdic, who was not present Saturday, in second with 1,147.

Cross-country skiing will begin with the women’s 10K individual on Monday, 15 February.

Sikora fights his way back to sixth

Poland’s top biathlete and Olympic team member Tomasz Sikora made a strong comeback to take sixth in the men’s 12.5K pursuit in Antholz, Italy on Sunday, an event in which the racers are started in a staggered fashion respective to their placement in the previous race. Sikora started in eleventh, fell to sixteenth place after missing one of the shots in the first round of shooting, then went on to rally, hitting his stride and all of his targets to finish just behind 5th-place Christoph Stephan of Germany. The race was won by Austrian Daniel Mesotitsch, after a dramatic last lap duel for first with Germany’s Arnd Peiffer.

The first men’s biathlon event of the Vancouver Games will be Sunday, 14 February.

Polish sometime superstar ski jumper Adam Małysz made waves in Zakopane over the weekend, just missing a place on the podium both Friday and Saturday. Małysz jumped for nearly identical distances as Thomas Morgenstern, but lost to him on form points both days. Gregor Schlierenzauer tied the record at Zakopane’s Wielka Krokiew ramp, and Simon Ammann broke it, making the event one of the best in Zakopane history. Małysz has struggled to regain his championship-winning form over the past several seasons.

Expect to see Małysz on the hill on Saturday, 13 February for the individual normal ramp event.