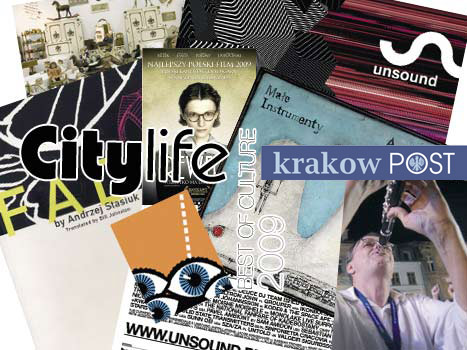 From a diverse range of exhibitions to festivals featuring cutting-edge music and films, not to mention a string of releases in the world of literature, cinema and music, 2009 was a busy year for culture in Krakow. Below, we’ve sorted through our shortlist to give you our staff picks on the best in events, exhibitions, concerts, music festivals, films, books, and records.

Best Event
Krakow Film Festival
Though Krakow is starting to rival some of Poland’s traditionally more film-obsessed cities, with newer kids on the block Etiuda & Anima and OFFCamera both presenting impressive offerings, it was the original Krakow Film Festival that stood out most this year, both with its array of films as well as its accompanying events. Although the list of worthy one-off events and festivals this year was far too long to choose just three, we feel that these provided some of the more unique and memorable experiences of 2009.

Best Exhibition
“Mass Collecting” (Bunkier Sztuki)
It’s difficult to know how many exhibits were crammed into Robert Kusmirowski’s “Mass Collecting”. The mounting alone must have required a magician of Gandalfian stature. But the results were jaw-dropping. Billed as a meditation on the nature of collecting, the show could well have come across as just a haphazard excuse to show Marek Sosenko’s gargantuan stash of antique toys. Yet it was much more than that. The toy collection was indeed magical – and an eloquent testament to why Krakow should go ahead with a full-blown museum. But the sinister upper floor, in which one felt like one had entered the attic of some deranged Dr Frankenstein-type inventor who hoards piles of peculiar junk, added a marvellous twist to the world of wonders below, prompting us to ponder the obsessive Gollum-like streak that can extend its grip.

Best Music Festival
Unsound Music Festival
When a festival has been improving by leaps and bounds every year since its inception, it’s inevitable that eventually it will top some best-of lists. Such is the case with the Unsound Festival, which this year surpassed all others in this city, in our opinion anyway. Though originally conceived as an electronic music festival, this year brought a wide spectrum of talented artists in diverse genres: electronic, dubstep, neoclassical, experimental, doom, and strictly unclassifiable. But even more impressive than the music itself was the combination of fantastic venues – Manggha, the Engineering Museum, the run-down Łaznia Nowa, and the epic St. Katherine’s Cathedral – as well as insightful workshops, panels, and films, all contributing to an unforgettable week.

Best Film
Rewers
After a long, long period in the doldrums, Polish cinema sprung back to life in 2009 with what will go down as a vintage year. Indeed, it seems almost a shame to single out just one film. But who could resist choosing Reverse, Borys Lankosz’s sparkling debut? Making a black comedy about the the worst stretch of Stalinist oppression (1948-1953) could easily have gone horribly wrong. Yet aided by a stellar cast and a superlative script, the 36-year-old director delivered a wonderfully assured work. With superb performances all round and elegant camera-work from Marcin Koszałka, Lankosz marshalled his forces and demonstrated that he has the skill and the confidence to play with genres in a wonderfully rewarding way.

Best Concert
Shalom on Szeroka
Featuring Balkan Beat Box, Cukunft and the All Stars Festival Orchestra as this year’s highlights, the Shalom on Szeroka, usually seen as the apex of the annual Jewish Culture Festival, outdid even itself. Along with some of the most exciting and original music to grace a stage in Krakow, the energy amongst the crowd (fuelled at least partly by the city’s blessing to serve alcohol on the square for the occasion) cemented the night as one of the best of 2009. In joint honourable and dishonourable mention stand Aphex Twin’s performances in Nowa Huta on the second and first night, respectively.

Best Book
Fado – Andrzej Stasiuk
Finally, the English-speaking world has been introduced to the mind of Andrzej Stasiuk, the essayist. In this collection of highly satisfying short pieces by one of Poland’s foremost contemporary writers (whose best books, with the exception of White Raven, have not yet been translated), we follow Stasiuk’s inner eye as it circles back and forth, reflecting on questions of Central European identity – past, present and future. Although reminiscing on his frequent travels across the border to neighbouring Slovakia, Hungary, Romania and the Balkans, at the heart of these essays lies his home in the midst of the Beskid Mountains, centre to a world of splendid Carpathianism, blowing out of the chimneys of mountain villages, from South Poland to Transylvania and beyond.

Best Music Release
Antoniusz – Małe Instrumenty
If anything, Małe Instrumenty are the proof to the thesis that good things come in small packages. Their name literally means “small instruments”, and it is indeed the case that all of their sounds arise from various toy and otherwise tiny musical musical contraptions. This debut album tops our chart as one of the most original to come out of Poland this decade. Also on the list is the second album from ambient electronic artist Jacaszek, whose set at this year’s Unsound festival was one of the most impressive, as well as a Christmas album by leading Polish film score composer Zbigniew Preisner.