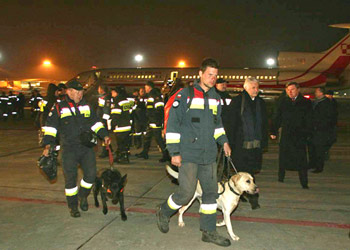 The Polish team of rescue workers returned to Warsaw on Sunday night after a week of digging out survivors in the rubble that now covers the Haitian capital of Port-au-Prince after a 7.0 earthquake struck on 12 January. They worked day and night against the clock to rescue those in the rubble, as well as treating those who were injured in makeshift camps. The rescue workers cooperated with other teams during the operation, mainly from Germany and the UK. As one of only 11 such teams in the world certified by the UN, they were technically and logistically prepared to assist in the rescue efforts.

The rescuers, from the National Fire Service Heavy Search and Rescue Group, left for Haiti on Friday, 15 January, and included a team of 54 rescue workers and 10 trained rescue dogs, as well as four tonnes of equipment used for lifting and removing rubble.

The Polish crew returned as a UN spokesperson announced that the agency is “no longer looking for people trapped in the rubble” but “will focus on helping the survivors” on Saturday.

The latest counts have brought the death toll to 150,000 people in Port-au-Prince, and teams with heavy equipment are now searching for corpses rather than survivors.