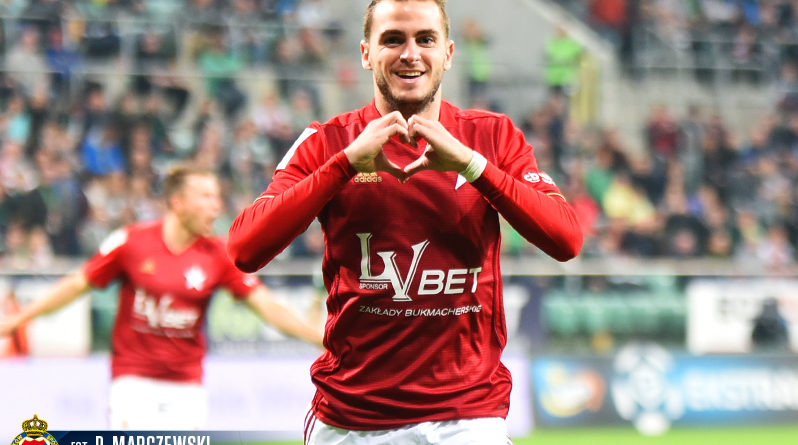 Wisła took the 3h30 trip to the beautiful city of Wrocław to challenge Śląsk. With both teams sitting at 17 points in the league, a win would allow one to distance the other.

With Patryk Małecki out, Coach Ramirez replaced him with Jesus Imaz on the wing. And with four Spanish players in the Wisła lineup, one on the bench, the coach and one in the Śląsk line-up, the game had a strong Spanish flavor.

Take the same and start over

The second half looked similar: pressure and offensive mindset. Once again, the Carlitos-Brożek-Imaz trio was involved in all the offensive actions, this time with more efficiency. Brożek opening wide to Carlitos, who found Imaz in the center lead to the first goal. Imaz deflected finish gave a well-deserved lead to Wisła after a smooth action. The type of action to show in the football academies.

Following a corner kick at the 70th, the referee gave Wisła a penalty based on the Video Assistant Referee who pointed a shirt-pulling in the box. Efficient team work from the referees. Carlitos did not struggle and scored his ninth of the season.

Carlitos and Imaz could have added more goals, however, the scoreboard remained 0-2 at the final whistle, despite Śląsk pushing again for a goal in the end.

It was a win in style, a strong performance to keep as a reference. Wisła showed a great organization and team spirit. Their attacking football has been impressive since the season start, and adding the efficiency to it could bring them very high in the table. Given that Wisła has not won in Wroclaw since November 2011, the curse has officially been broken.

The Spanish influence is not only in their play style, but also reflected on the scoreboard with Carlitos and Imaz.

The ‘White Star’ looked ready to host the mighty Legia Warsaw on Sunday 22. After the Krakow Derby, the Wisła-Legia clash is THE other Classic in Polish football!

Cracovia on the cliff’s edge

The Cracovia Pasy had a crucial home game against Pogoń Szczecin. Sitting at the table bottom with 7 points and not a single home win, Coach Probierz’s men had to react and Pogoń seemed the right victim at the right time, since they were sitting only 2 points above the Pasy.

Cracovia welcomed Krzysztof Piątek back onto the team, and Coach Probierz changed the tactics from 4-4-2 in the last game to 4-2-3-1, leaving his top scorer Piątek all alone up-front.

The Pasy put on high pressure from the first second and it paid off. Piotr Malarczyk scored his first of the season, with a strong long-distance shoot. After less than one minute in the game, that is what we can call a dream start.

Another goal chance later, Cracovia slowly started to let their opponent back into the game, giving them more space, until they even equalized 10 minutes from the break. However, the Video Assistant Referee disallowed the goal, based on an off-side position. A great call at the right time, when Pogoń was getting back strongly into the game.

Pogoń Szczecin had the first chance of the second half, before Cracovia scored the 2-0 shortly later. Javi Hernández was lucky to see his shoot get into the net, despite Zaluska’s intervention. But the former Celtic and Wisła goalkeeper let the ball slip below his hands.

The home fans could finally breathe 15 minutes from the end, when Krzysztof Piątek scored a third goal to seal the win. The 22-year-old took advantage of a defensive mistake, to win his one-on-one with Zaluska and score his 6th of the season.

A big sigh of relief

What a relief. The Pasy did not shine with the quality of their football; however, they got the job done. They showed spirit, fought as a team, and, most importantly, they were efficient. Pogoń Szczecin was admittedly better, but, at the end of the day, the points matter more than the performance. Cracovia needed to win and they did. They left the relegation zone and are now sitting at the 13th spot.

They also booked their first home win of the season, and broke a chain of nine win-less consecutive games. Let us hope that this will get them started and will bring the fans back to the stadium.

Next on their plate: a short trip South towards the mountains to meet the impressive promoted team Sandecja Nowy Sącz.