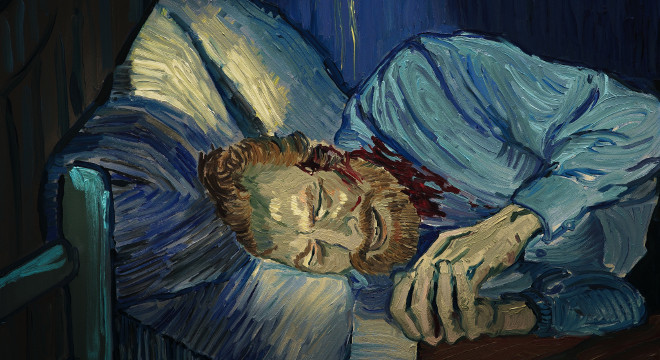 Loving Vincent is certainly one of the most lavish and elephantine animated films ever produced on the Old Continent. Instead of tracing over the live action footage, using a technique known as rotoscoping, an army of 125 craftsmen, equipped with brushes, was involved in the making of a very peculiar and partially crowdfunded biopic devoted to Vincent Van Gogh. Eventually they delivered 60,000 paintings sketched after the filmed footage as well as Van Gogh’s original works.

As the storyline goes on, all the people who were the closest to the Dutch painter in Arles before his tragic death grab the spotlight. Among the characters, it’s Armand Roulin, son of famous postman Joseph Roulin, who is the most deeply engaged in understanding the reasons that pushed Van Gogh to take his own life. The action takes place after the death of Theo, Vincent’s brother, so it’s only right that the other characters are entitled to cling to the possibility of explaining the inexplicable.

However, in their concern to keep the viewers interested, directors Kobiela and Welchman have built an over-narrated and spirit-dampening movie in which the preponderance of the dialogues hinders the viewers’ immersion into the violent beauty and materiality of Van Gogh’s oeuvre. The film could be even watched on mute, if it were not for Clint Mansell’s superb score. The British-Polish duo succeed in bedazzling the audience with the first fully painted animated film, but Loving Vincent is all but a visual poem in this respect.