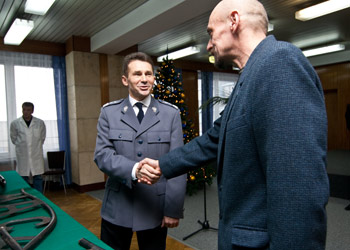 Upon seeing the giant pipes of twisted metal of the recovered Auschwitz sign up close, it takes effort to remember that actual human beings caused its damage: the letter “T” in “Arbreit” warped as if by a supernatural force, the edges of the three pieces jagged as if a giant’s arms had torn them apart in one quick burst of strength, tubes of metal arched unnaturally in opposite directions.

Such was the impression this afternoon at the Voivodship Police Headquarter in Krakow when authorities from the Krakow police brought out the pieces of the sign and laid them out for reporters to see. This was all part of a small ceremony, in which the police officially returned the sign to the Auschwitz Museum for the first time after the 18 December theft of the sign.

After the sign was recovered three days later, it was held in the forensic laboratory of the police headquarters, where it was studied by specialists. They scoured the sign for evidence of how it was dismantled and what kinds of tools were used in the process, as well as biological data such as hair or blood samples, which could be used as evidence against the suspects. So far, according to Voivodeship Commander of Police Andrzej Rokita, all of the evidence collected from the sign itself points to the suspects already in custody for the theft.

The five accused men had been caught with the help of informants, after a reward of 100,000 złoty was offered by the museum. Today police revealed that the reward will be split 60/40 between two people, who will remain anonymous for their own safety. The Ministry of Culture has given the money to the Voivodship Police in Krakow, who will handle the distribution of the funds.

This afternoon, the sign was handed over to Jarosław Mensfelt, spokesman for the Auschwitz-Birkenau Museum. The police kept their promise that the sign would be returned before the 65th anniversary of the camp’s liberation, which will take place on 27 January. However, Mr. Mensfelt made it clear that the sign will not be returned to its place for the ceremony: “Before there is even a possibility of returning the sign, several factors must be met: the repair of the sign, [an improvement of] the security system, and a positive opinion of the General Conservator of Monuments and the International Auschwitz Council.” Mr. Mensfelt stressed that this process will likely take several months.

The museum is still seeking funding to finance general renovations as well as an increase in security. So far, the failure of museum security to prevent the theft has resulted in one dismissal, that of the head of the security team on duty at the time of the incident.

Though the sign has been returned, the case of its theft is far from closed, reminded police spokesman Inspector Dariusz Nowak. Mr. Nowak stated that this morning, the Krakow prosecutor filed for a European Arrest Warrant for a Swedish citizen, Anders Hoegstroem, who they believe is behind the theft’s commission. If issued, the warrant will speed up the extradition process and allow for the transfer and trial of the suspect within Poland. It is unknown at this point whether Swedish prosecutors will press charges, which could be possible if it is determined that the man committed a crime within the territory of Sweden as well.