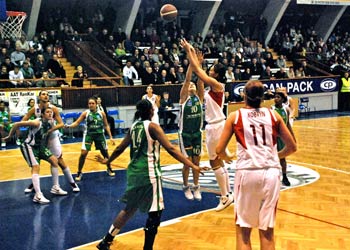 In women’s basketball, Cracovians Wisła Can-Pack unambiguously thrashed Utex Row Rybnik on Sunday night, consistently outscoring them 2 to 1 to end the game with an even 100 to Rybnik’s 53. The game marked the debut of former Lotos Gdynia and Polish national team point guard Paulina Pawlak for Wisła, and the return of captain Dorota Gburczyk after her injury following a brutal elbow to the face by Odra Brzeg’s Brittany Denson on 19 December, which had knocked her unconscious for several minutes, required the application of emergency first aid, and left her hospitalized with a severely broken nose.

The retooled squad thrilled the estimated 1,800 fans on hand, dominating Rybnik in every category at both ends of the court. Wisła demonstrated that they had ironed out persistent problems from the three-point line, as Czech forward Katerina Zohovna led the scoring with 22 points, including 18 from three-point range. Club points record holder, Spaniard Marta Fernandez, had only ten points for the night, as club trainer José Ignacio Hernández sat her and Pawlak on the bench for most of the final quarter. Nikita Bell and Devanel Hampton led the scoring for Rybnik, with 18 and 16 points, respectively.

As the game drew to a close with the scoreboard showing 98 to 53, the home crowd chanted “We want a hundred! We want a hundred!” then exploded in joy as Agnieszka Majewska sunk her jump shop from the top of the key in the final second.

Wisła is currently in fourth place in the tight race for first in the Ford Germaz Ekstraklasa with 27 points. Lotos Gdynia is presently tied with uncontested acronym-length champions KSSSE AZS PWSZ Gorzów Wielkopolski, each with 30 points, followed by CCC Polkowice, with 28. Wisła’s next league game will be against INEA AZS Poznań on Monday, 24 January at 18:00 CET.

Sunday’s victory came after Wisła was edged out on Thursday in Schio, Italy, in a Euroleague match against Beretta Famila, 92 to 88. The defeat ended their string of eight consecutive victories in the European elite league, where they remain the leaders of Group B. They will play their final game of the group round Wednesday, January 20 at Gospic, Croatia at 18:00 CET. Gospic has dropped eight of their nine Euroleague match-ups.