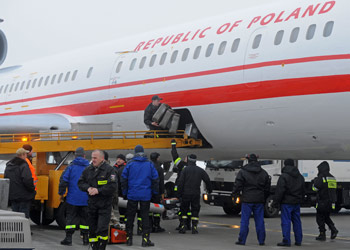 Five days after a devastating 7.0 earthquake rocked the foundations of Haiti’s capital, Port-au-Prince, relief is still desperately needed, and the growing list of countries around the world sending aid or workers now includes Poland. On Friday, the Polish government sent 54 rescue workers, 10 rescue dogs and four tonnes of equipment that will aid in the removal of rubble from earthquake sites in the Haitian capital. The group includes mainly fire fighters and other rescue personnel from across Poland. The rescuers will spend six days in the country.

Prime Minister Donald Tusk originally promised $50,000 in aid to the earthquake relief fund, which was criticised for being too small. Now, the foreign office has guaranteed $150,000 in aid in addition to the rescue personnel. Foreign Minister Radosław Sikorski defended the donation, saying that $150,000 is “not a ridiculous sum”. Additional funds will also be donated via the EU. Polish charity organisations, such as Polska Akcja Humanitarna and Caritas, have been raising substantial funds of their own.

Recent reports from the Haitian capital have shown that episodes of violence and looting are becoming more frequent in the chaos left by the earthquake. The Polish rescue team is not armed, and are being assisted by American troops. However, they had to evacuate one site on Sunday when shots were heard in the area. According to National Fire Service spokesman Paweł Fratczak, the workers relocated to another sector of the city and continued rescue operations.

Meanwhile, Poles may be amongst the dead in Haiti, as five Poles are missing and a UN aid worker with Polish and Canadian citizenship has been reported dead by TVP television. According to Minister Sikorski, several Polish tourists have been rescued from Haiti.

Readers who would like to contribute to the effort can donate to the Krakow Post Haiti relief page via Mercy Corps. Readers can also text “POMAGAM” to 72052 to donate to Caritas’ aid effort.