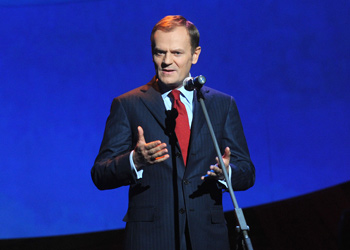 On Saturday, 16 January, Polish Prime Minister Donald Tusk received the 2010 Charlemagne Prize (Karlspreis) in Aachen, Germany. The prize was awarded in recognition of “his work for furthering liberty and democracy in Europe”. In a statement, the prize organisers declared that PM Tusk worked towards “the understanding and cooperation of Poland with its European partners”. Tusk and others in his Civic Platform (PO) party had been strong supporters of the ratification of the Lisbon Treaty.

Speaking to reporters in Brussels, European Commission President Jose Manuel Barroso congratulated the prime minister, stating “Prime Minister Tusk has played a major role in integrating Poland into the European Union and placing his country at the heart of Europe since its accession in 2004. Today, Donald Tusk is one of the most respected European leaders. The Polish people can also take the highest pride in this recognition.”

The prize, named after founder of the Holy Roman Empire Charlemagne, has been awarded since 1950 by the city of Aachen for services furthering European unification. Past winners include Sir Winston Churchill, The European Commission, Henry Kissinger, Václav Havel, and Angela Merkel, amongst others. PM Tusk is the third Pole to receive the prize, after Bronisław Geremek in 1998 and the late Pope John Paul II in 2004.