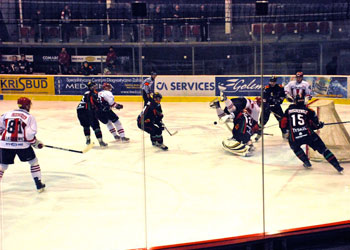 On Friday, 8 January, the two leaders of the Polish Ice Hockey League (PLH) and last year’s finals rivals played a much-anticipated match in front of one of the largest crowds Cracovia has drawn all year. GKS Tychy won their last match-up against Cracovia at home on 13 December, 3-1.

While the two clubs’ fans enjoy friendly relations, they are the most intense competitors on the ice within the PLH, and each team came into the match with 75 points, tied for the lead as the playoffs draw near. “We’ll have to play with complete concentration from the first minute to the last,” said Rudof Rohacek, Cracovia’s head trainer, before the match. “As always, in a match like this, the goaltender’s play can be the deciding factor, and we’ll need to stay clear of any unnecessary fouls.”

After a cautious start by both teams, and several excellent stops by Tychy’s goalkeeper Arkadiusz Sobecki, Tychy was quick to find its rhythm and launched counterattack after counterattack, capitalizing on takeaways below the goalline and intercepted passes. In the ninth minute, Tychy forward Adam Bagiński beat Cracovia keeper Rafał Radziszewski in a net-crashing close-range exchange to open the scoring. Cracovia nearly drew the match to a tie in the thirteenth minute when captain and league points leader Leszek Laszkiewicz shovelled a perfectly played puck into the net from short range, but only after the whistle had blown, as the sprawled and desperate Sobecki dislodged the goal from the ice. Referee Grzegorz Dzięciołowski did not count the goal over protests from the Cracovia captain and howls of outrage from the home crowd.

The second period opened with a quick goal from Tychy’s Michał Garbocz, immediately followed by another two minutes later by Tychy captain Adrian Parzyszek, then gave up one to a wide shot hammered home by Łopuski to leave the score at 1:3 at the second intermission.

A powerplay goal from Cracovia defender Marian Csorisch to start the third period raised the crowd’s hopes that the home team would tie the game up, at least forcing extra time. Cracovia, however, were unable to convert on repeated opportunities during four minutes of power play in the middle of the period, including a brief 5-on-3 — a persistent problem for the Polish champions — and Tychy rallied with renewed energy after returning to the ice in full strength, scoring another goal, and sealing the deal with an empty-netter in the final minute, as Cracovia pulled their keeper to put on an extra attacker with less than 45 seconds remaining. The final score was 5:2

The victory secured Tychy their first place spot in Group A of the group round of the PLH regular season with only a few weeks remaining before the playoffs begin. At present, the standings would put Cracovia and Tychy on the road to meet in the finals.

Cracovia will play on their home ice on ul. Siedleckiego next against Wojas Podhale on Friday, 15 January. Face-off time has yet to be announced.