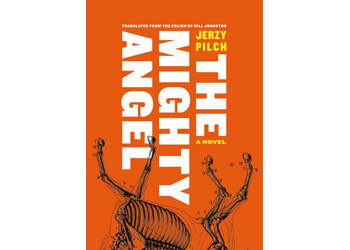 The subject of this novel is rather a different kind of spirit to that which the title suggests. The Mighty Angel is in fact a pub and the first port of call for an inveterate alcoholic and the book’s narrator – also called Jerzy – on being released from each of his 18 stretches on the “alco ward”.

We are taken on a journey to the triple distilled depths of drunken depravity, through the eyes of a man knowingly enslaved by language, women and alcohol. A ray of hope materializes early on in the form of an enigmatic poetess, who becomes the object of a delirious infatuation, and a would-be monument to the redemptive power of love. But ultimately the reader is left wondering if this is just the latest illusion to be conjured up by the desperate mind of a well-versed alcoholic.

Much of the action unfolds in the alco ward, which he fills with sparkling anecdotes and colourful characters such as Don Juan the Rib, The Most Wanted Terrorist in the World, and the Queen of Kent. The patients are required to keep an “emotional diary” and the ward has the feel of a “creative writing programme”, in which Jerzy’s writing skills are in high demand among his less articulate comrades. Despite the odious nature of the subject, the grittiest details are related with a light heart and a sense of nostalgia, in an effortless style that often verges on the poetic. But this is not a misconceived ode to the drunkard, but rather a symptom of another fixation: “The word is my stimulant, my narcotic… language is my first addiction.”

Throughout the novel Jerzy finds himself harassed by the “seductive beast of drunken rhetoric”, an idolatry of words that always threatens to usurp truth in favour of a literary flourish or an irreverent witticism. When faced with the question “Are you trying to drink yourself to death?”, rather than face the banal truth, he can’t resist a “well-turned phrase”, responding glibly, “I can neither confirm nor deny it”. Alcohol redoubles this tendency by dimming his worldly concerns in such a way that “things of the mind that have been completely freed from the bonds of worldliness are nothing but pure graphomania”.

Halfway through the book is an interlude devoted to drink inspired quotations, from the Book of Psalms to Charles Bukowski, all of which tend to romanticize the decadent trials of the alcoholic. Jerzy characterizes his affliction as an ongoing war: in a seemingly unbreakable cycle he is discharged from the alco ward to return to “civilian life”, which unerringly means a swift descent into an alcoholic haze, before regaining consciousness back on the ward to begin the process again.

Nevertheless, he is able to harbour a desire to possess “the true writerly power to change the course of events”, and with an allusion to a verse by the famous Polish poet Czesław Miłosz, to create a “literature that liberates from weakness”. And here Jerzy’s plight takes shape: between a drunken coma and a studied convalescence, between a disembodied graphomania and a literature of redemption.

The book unfolds with an unrelenting sense of humour and an acute instinct for extravagant detail. By giving the narrator his namesake, Pilch evokes the relationship between the author and his work, and at one point enters the plot to suggest that the two are interchangeable. But the admission seems deliberately ambiguous: it is not necessarily to draw obvious biographical parallels, but rather to highlight the innate power of literature to bring the author into communion with all possible fates.