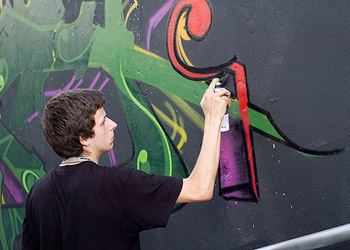 Whether describing Soviet-era Cracovian suburbs or the not yet renovated housing blocks just outside of the city centre, the adjective of choice is often “grey”. But these days, both Cracovians and visitors can be delighted by colourful murals adorning worn-out and desolate parts of Małopolska’s capital. The spectacular works of art, which beam out of some of the busiest regions of the city, have come into being due to the efforts of the Zooteka Agency.

The organisation has made its name as the initiator of the largest historical murals in the world, commissioned by the Krakow City Office, the Ministry of Culture and National Heritage and the National Cultural Centre. The grandest, “Silva Rerum” and “Triumphal City Gateway”, have sparked a tremendous media response and received wide approval from the public and city authorities.

The idea itself emerged in 2006, and it was primarily aimed at adapting the immense grey walls in order to evoke the most significant monuments of Krakow, and a host of its eminent citizens. However, Artur Ludwik Zakrzewski (the co-creator of the concept of the murals) broadened the initiative to encompass a very detailed reflection of Krakow’s history. The background preparations lasted over a year, and it took five weeks for the best Polish graffiti artists to complete the works.

“The media attention to the murals has exceeded our expectations and opened the way towards the realisation of a theory of city ‘muralisation’,” said Tomasz Kubik from Zooteka, explaining that the term means adapting grey, uninteresting surfaces of suburban buildings into attractive murals, historical and educational in character. The works especially target young people, making them aware of history thanks to easily comprehensible graffiti language.

The high awareness of the murals among the city’s inhabitants is a result of thoughtfully selected locations and an extensive promotional campaign. All of the murals are published in the form of leaflets, postcards and calendars, while media representatives are invited to witness the creative process itself. All new works are officially launched and accompanied by a press conference.

The group received an official thanks from Krakow’s Mayor Jacek Majchrowski for “Silva Rerum” (literally “forest of things”, or a multi-generational chronicle, kept by many Polish noble families from the 16th through to the 18th centuries). The work is the world’s largest graffiti project, realised on the occasion of the 750th anniversary of the Location of Krakow. It means a chest where, according to tradition, family records and documents used to be stored. At 100 metres in length, the mural is indeed a box that contains the entire chronological history of Krakow from the earliest ages to modern times.

Another celebration, the 325th anniversary of the Battle of Vienna, provided the impetus to realize the “Triumphal City Gateway”, in cooperation with the National Cultural Centre, the Ministry of National Heritage and the City Council. The viaduct located at 29 Listopada Avenue presents a profile of John III Sobieski and three Hetmen – heroes of the relief of Vienna – whereas two walls underneath depict painted compositions of the glorification and triumph of one of the most fabled Polish monarchs.

Apart from historical murals, one does not fail to notice the traditional symbol of Krakow, the legendary Wawel Dragon, located on Wołyń Boulevard in the vicinity of the now derelict Forum Hotel. The creature is composed of Cracovian architectural symbols, as are the letters of the inscription: “Smok Wawelski” (“Wawel Dragon”). Therefore, “apart from its aesthetic shape, it also plays a didactic part, allowing viewers to reflect on the recollection of the most important Krakow monuments,” says Tomasz Kubik.

The group’s success has encouraged the planning of further projects. The first one, “City Book”, is to be twice as big as “Silva Rerum” and will be painted on the viaduct of Wit Stwosz Street, glorifying themes from Polish literature and prominent writers and poets. “We want this place to become a compulsory stop during school trips, thanks to which the youth will learn and remember the history of Polish literature,” says Tomasz Kubik. The second mural will be made on the occasion of the 600th anniversary of the Polish victory in the Battle of Grunwald.

Bearing in mind the careful planning, the innovative handling of the subjects, and their scale and publicity, the projects are bound to succeed.