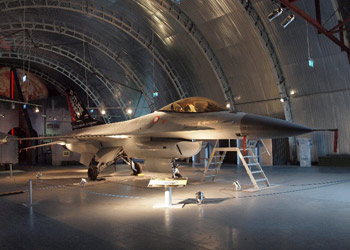 The Museum of Polish Aviation stands in the middle of parkland, housing projects, and academic buildings halfway between downtown Krakow and Nowa Huta. The site was the first airport in Poland, serving the city until 1963. Large stretches of runways and taxiways remain. The scene this winter is dominated by the new exhibition and administration pavilion, due to open around September 2010. Designed by Berlin-based firm Pysall Ruge Architekten, its striking form contrasts with the pre-war hangars that house many of the exhibits. The new pavilion will feature light, home-built aircraft, a Polish speciality.

“We want to say to people: ‘Look, these airplanes were built by someone just like you’,” says Jan Hoffmann, head of the Exhibition Department at the Museum. “Today, everybody flies, but people are isolated form the airplane. They are herded down a tube and look for the seat with their number above it. They can rarely walk around the outside of the airplane or see where the pilots sit and the controls they use. We want to show people what an airplane is like, what it looks and feels like up close, and how it works. This is what we will do in the new pavilion. It will be an introduction to the rest of the collection.”

The first striking impression at the museum today is the diversity and size of the collection: here is fifties communist leader Gomułka’s “salon” plane, there sits an American supersonic fighter-bomber and a Polish Air Force MiG-29, one of the most feared warplanes in the world and apparently still airworthy. In the larger and smaller hangars lurk pristine jet fighters from both sides of the Cold War; the legendary Spitfires and Messerschmitts, and pioneering planes from the First World War that seem to be assembled out of wires, canvas, and polished wood. “How could they build something like that and then fly in it?” is what visitors often say when looking at the oldest airplanes. One whole hall is full of hundreds of plane engines and the unique smell of old oil and cold metal that was once red hot; another, moodily lit, contains some of the world’s most significant examples of what can only be called “aviation archaeology”.

Another impression is the contrast between airplanes that look like they just came off the assembly line, and others that are flaking and peeling. “It’s terribly expensive to restore and maintain an airplane for outdoor exhibition. We can only do a couple of planes a year,” says Piotr Łopalewski, head of the Collection Department. Hoffmann, however, points to some encouraging recent examples of volunteer restoration projects. An intoxicatingly beautiful MiG-15 was stripped down to bare metal by an aircraft modellers’ club from Nowy Sącz before being refinished. Former Polish Air Force pilots bought the gold paint and financed the refurbishment of a recently-retired Sukhoi to commemorate their service.

Attendance is between 25 and 35 thousand per year, plus another 30 to 40 thousand who come for the annual “aviation picnic”, which features flying displays. Unfortunately, says Piotr Łopalewski, “Poles regard technical museums as second-class. Not foreigners. We depend on our foreign visitors. Above all, there are the spotters. Whole tour groups come with lists of aircraft, they can identify each variant, and they’re thrilled because we have many types they won’t see anywhere else. Older people look at the Warsaw Pact warplanes and feel a thrill because, for decades, this was the enemy in a war the West was prepared to fight. We get people from the aviation industry and the military who are in town on business. But we also get a lot of people who wander in because ‘everybody said this is a cool museum, and it’s something different from halls full of paintings and stuff’. And those people come here and they are often the most thrilled of all, the most enthusiastic, because they never knew how an airplane works, and now they can see it up close, touch it, understand it.”

Some rare historical planes were given to the Museum for safekeeping. The Ministry of Defence also has an obligation to offer the Museum a chance to acquire all the types that are withdrawn from service. This accounts for the vast numbers of MiG fighters, for instance. In the eyes of a Western museum, these MiGs and so on are very exotic. So the museum makes trades. “To tell the truth,” says Piotr Łopalewski, “we are tired of these ex-Soviet airplanes, because they were all we had to look at for decades. So we are happy to get the Western types that we could only see in magazines. Unfortunately, we are running out of MiGs. Once, we had more MiG-21s than we knew what to do with. Not anymore.”

Piotr Łopalewski, head of the Exhibit Inventory Department, graduated from the Fine Arts Academy in industrial design. He was always an airplane fan, but he waited a long time for a job here. “We are all simply enthusiasts,” he says. “This is what we love. In fact, nobody at the museum has a professional background in aviation.” So, when fans come here to visit, they are coming to an institution that is also run by fans.

Throughout the museum, there are only two restrictions in force: “Do not climb on the airplanes” and “Do not spin the propellers”. People often ask whether it is possible to sit in the pilot’s seat. Jan Hoffmann, the head of the Exhibition Department, smiles and says, “No, because you can never be sure that a small percentage of people won’t be destructive, unfortunately”. He pauses, and gets a far-away look in his eyes before going on, “Of course, sometimes I see a child gazing at an airplane in a certain way, and I remember how I once gazed at airplanes in the same way, and all I can say is that, in such special cases, a child who really wishes to sit in the pilot’s seat will not be disappointed”.

Everyone on the museum staff spends a lot of time hanging around the exhibition, and is ready to act, formally or informally, as a docent, someone ready to share expert knowledge. “I stand nearby and listen to what they [the visitors] are saying about the airplanes, and I have to be very delicate about whether to intervene or not,” says Jan Hoffmann. “Sometimes they don’t know what they’re talking about but they’re showing off or trying to be authoritative, and then you have to be tactful. At other times, I can see that they’re really interested and I can give them some information which is perhaps new to them, and then it’s great to talk.”

The Hideous Biplane of the Apocalypse

What kinds of information might this be? For instance, take the PZL-15 “Belphagor”. “I despise that airplane,” says Hoffmann. “I have nothing good to say about it at all.” Over 30 years ago, in the depths of the Cold War, this aircraft caused a brief sensation at the Paris Air Show, and lingered in legend as an embarrassing oddity. Why? Well, here’s the capsule description of the PZL-15: “Jet-powered agricultural biplane with fully pressurized cockpit.” Many aviation writers regard it as, hands down, the weirdest aircraft ever built, let alone the most butt-ugly. Only two are on display in the entire world – this one, and another one outside Moscow. Piotr Łopalewski gives the more-or-less official version of the story: “The plane was built in Poland to an entirely Soviet design, for use in the Soviet Union.” Khrushchev had initiated the “Virgin Lands” program to develop vast new agricultural areas, where crop yields would depend on chemicals. “This plane was supposed to replace the old An-2 biplane. It was supposed to be more efficient, but it wasn’t.” Then the price of oil went crazy, and that was the end of it.

Łopalewski muses that there may have been more to the story. “Why have a hermetically sealed, pressurized cockpit? For protection against pesticides or fertilizers? Perhaps, but other agricultural planes have much less protection.”

Could this improbably ugly, inefficient Soviet design have had a more sinister purpose? Something to do, perhaps, with chemical warfare? “Perhaps,” says Łopalewski, “but possibly not that. Possibly something else.”

Jan Hoffmann, who says he hates the plane, is more forthcoming. “After a nuclear war,” he says, “the Soviets intended to carry out ‘deactivation,’ to neutralize the radioactive material. It would fly slowly, and very low, spreading the deactivation agent” – whatever it was. “This is why, instead of a conventional propeller, it had a high-mounted jet engine. Air currents from a whirling propeller could stir up radioactive contamination, but not a jet. This is why it had such heavy, expensive hermetic pressurization. This explains everything about it.”

You can look at the weirdly ugly jet-powered biplane decaying in the open air in Krakow and imagine that some Cold War crisis had finally gone nuclear, and you had somehow survived this Armageddon in Europe. If you managed to lift your head above the radioactive rubble, you might see the Belphagor, its twin headlights glaring through the dust and its jet engine howling, as it skimmed a few feet above the desolation. It would have been the last thing you ever saw – or the first thing you saw in the world after the Apocalypse.

The Jewel in the Crown

“Our Mona Lisa,” Piotr Łopalewski calls it—the PZL P.11c. With its characteristic gull wing and a variety of other ingenious design details, this is an airplane you can spend a long time admiring. It is the only example remaining in existence. In the mid 1930s, every Polish enthusiast will tell you proudly, it was one of the best fighter planes in the world. A couple of years later, it was obsolete. This particular example comes from the Krakow Squadron. On Sept. 1, 1939, it was based in the very same hangar where it is now on display at the museum. The Germans captured it somewhere at the end of the campaign and took it to a technical museum in Berlin. Later, they moved it and the rest of what was erroneously called “the Goering Collection” to Pomerania, and it was captured at the end of the war in what is now Czarnków, Poland. Its engine is still in running order. Those wings can be seen as a part of the Polish romantic tradition, as an allusion to the “winged” Hussar cavalry; in the underside of the P.11c’s left wing, you can still spot bullet holes from the September 1939 campaign.