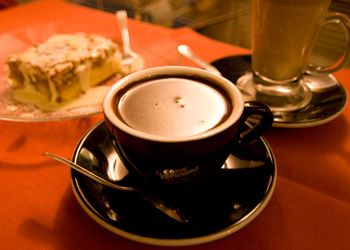 Well, it’s January, possibly the most miserable month of the year. Expanding waistlines, contracting wallets and plummeting temperatures all contribute to the gloom. There’s little of any interest on the market stalls apart from the acres of clementines, oranges and apples, so the focus turns indoors.

Luckily, Krakow is blessed with no mean selection of cosy places to while away the dark hours between the setting of the sun and dinner. And perhaps the most comforting of all comforting things to drink is hot chocolate: a little cup of sweetness, richness, serotonin and endorphins that gives the brain a rush of happiness. Luckily, hot chocolate is a standard item on many menus in Krakow’s cafes, so in the interests of journalistic accuracy I set myself the task of trying a few. Even though I love chocolate, it wasn’t as easy a task as you might imagine. Ever since I first tried the hot chocolate at Nowa Prowincja on ul. Bracka I’ve been hooked, and this has become the standard that I measure all others by. It’s served from an innocuous, slightly industrial looking machine that stands on the counter. It’s a self service cafe, with moody staff that usually do pretty well at ignoring the stares of the line of customers impatiently peering over at them from behind the counter, so you can’t miss it as you wait. The machine’s looks don’t really do justice to the dark, not too sweet and very, very thick chocolate that oozes out of it in voluptuous glugs into a simple china coffee cup. A cup of Nowa Prowincja hot chocolate is like a meal; you have to eat it with a spoon. In short, it’s worth waiting in line for.

Even though I’m a loyal fan of Nowa Prowincja’s hot chocolate, I’ve noticed that over the last few years competition has arrived in town. Concerned that there might be a better place to get my fix, I set off with an empty stomach to test out the most likely looking candidates.

My first stop was Camera Café; a smart, elegant space on ul. Wislna, a few steps from the Rynek. On a chilly Sunday afternoon it was full and buzzing with people catching up, warming up and flirting away. Camera Café promotes itself as the first chocolate drinking place in Krakow. Their publicity says that their chocolate and coffee are created by Bożena Sikoń, a well respected pastry and confectionery chef in Warsaw, so assuming that she knows what she’s doing, I ordered a chilli and black pepper hot chocolate and looked forward to the additional dose of endorphins from the chilli. The idea of combining chilli and chocolate has been around since the Aztecs, so there has been time to perfect the technique, and I was looking forward to trying Camera Café’s version. The steaming hot chocolate arrived quickly and looked lovely; bigger than the Nowa Prowincja version and in a more elegant glass. The chocolate wasn’t as thick or as rich though, and all I could taste was sweet chocolate – the flavour of chilli or black pepper was nowhere to be found, although the slight peppery fieriness that came a little later suggested that chocolate had met pepper at some point. Overall, a little disappointing.

Then it was off to Wedel’s Pijalnia Czekolady on the Rynek, the heavyweight of the competition. A luscious interior, it looks as though it’s been there forever but in fact it was opened only a couple of years ago. The effect is ruined slightly when you remember that this is a flagship in a chain of cafes found in every self-respecting shopping mall in Poland. I guess that’s inevitable when you’re owned by Cadbury’s. No matter. I was kindly escorted past the selection of tempting chocolates in the shop at the front to my seat in the middle of the romantic interior and given a menu. The prices here were by far the highest of the three cafes I tried, but they offered the most luxurious experience. The hot chocolate can be made with plain or milk chocolate and with an almost bewildering variety of flavours. In the end, I ordered a hot chocolate with ginger and it arrived in a large glass, sprinkled with dried ground ginger and served with three cubes of crystallised ginger on the side – a nice touch. The chocolate itself was the least rich and thick of all three, but the ginger flavour and heat were there, thankfully.

After three large chocolate hits in one day I went home floating on a cloud, slightly rounder but happy.