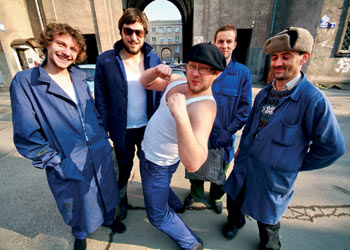 This month, we hook up with Michał Ostrowski, better known as “Crazy Mike”. If you’ve spotted a customised black and red Trabant cruising around town, you can rest assured it’s one of Mike’s madcap fleet.

Crazy Mike has ridden roughshod over Lenin’s earnest legacy by turning communism into an entertaining (capitalist) package tour. Curious customers can book a ride around Nowa Huta – the onetime “ideal communist city” – for an idiosyncratic glimpse of the “good old days”.

Michał Ostrowski: My dream is to have a house in the middle of the Ojców valley. It looks like a little alpine village. There are parts where there are no tourists, and you feel like you’re in the mountains, but you’re just 20 km from the centre of Krakow.

MO: I would educate people – particularly budding entrepreneurs. I would start a campaign to open lots of bars in various districts. I hate the situation that if you want to watch a match, or eat some food and drink a few beers, you have to go to the Rynek or Kazimierz. It’s annoying. I like Prague, in that you have bars everywhere with good food.

Also, I would change the traffic policy. I would ban private vehicles throughout the entire city, and increase the number of taxis, buses and trams – increase them a lot! I’ve realized that making wider roads is not helping at all. There are just more and more cars – it will never help.

MO: Omerta for good beer from small breweries. Bar Smak on Karmelicka for delicious, cheap Polish dinners. Pauza and Drukarnia for a great, authentic atmosphere where you can hang out for hours.

MO: The lack of bars in the outlying blocks. The domination of Zywiec, Tyskie and other big breweries in clubs. There are so many small breweries in Poland with delicious beer, but they’re absent in the bars!

MO: Skiing and snow. If there’s no snow, then there’s no option – you have to be depressed.