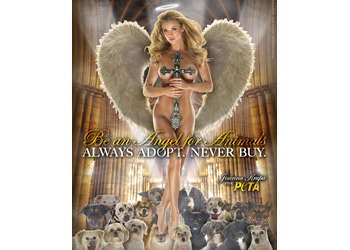 Joanna Krupa is a hard woman to ignore. The 30-year-old model enjoys the kind of curvaceous good looks that get you on the cover of Playboy. Photographed naked, sporting a pair of angel’s wings and using just a silver crucifix to preserve her modesty, she becomes ever harder to overlook. This is how she appeared in a recent poster campaign for the U.S.-based animal welfare charity PETA. Catholics around the world were up in arms. Polish Catholics were up in arms and standing on their chairs, some of them at least. The fact that Joanna Krupa is Polish made the ad doubly difficult to take; insulting the cross is bad enough, but for a Pole to be seen doing so in the eyes of the world’s media touches a sensitive Polish nerve of national pride.

National broadcaster TVN held a televised debate on the story. Giant screens displayed the offending image throughout the discussion, in case viewers were unable to imagine exactly what a blonde wearing only a crucifix might look like. Learned and not-so-learned figures pontificated in the shadow of Ms. Krupa’s blasphemous bosom and the aspiring actress herself appeared via satellite link to explain, in heavily accented Polish (she has lived in the States since she was five), why there was nothing nefarious about her god-given form appearing in shot with the symbol of the crucifixion. The PETA website undoubtedly received an additional million visits, thereby fully justifying the organization’s ruthlessly clever advertising strategy.

In itself the Joanna Krupa story is a storm in a teacup. The great majority of Poles are sensible enough to recognize a cynical shock tactic when they see one and get on with their lives without feeling the need to foam at the mouth. Coming as it did just a short time after a potentially far more explosive story on the theme of Christian symbolism, however, it gave me pause for thought. Back in November, the European Court of Human Rights ruled that displaying crucifixes in Italian classrooms violates parents’ rights to a secular education for their children. You could have heard a pin drop in Poland, followed by a deep intake of breath and a great deal of shouting.

Crucifixes are a common feature of most Polish classrooms, public offices and, of course, homes. Scare stories suggesting that the EU was on the verge of banning crosses from all state buildings across the 27 member states began circulating at once. For Poles, the idea had nasty echoes of the communist era, when Christian symbols were also banned from public buildings. The return of democratic freedom in 1989 gave a boost to crucifix manufacturers that they doubtless still recall with wistful fondness at annual conventions.

Polish president Lech Kaczyński earned a rare moment of near-universal public approval when he responded to the ruling by saying: “Nobody in Poland will accept the message that you can’t hang crosses in schools… Perhaps elsewhere, but never in Poland.” Which raises the unpleasant question of what will happen when Europe-wide restrictions on the display of religious symbols in public buildings become a reality, as they surely must if the principles of religious and political freedom enshrined in the European constitution are to be carried through. When that time comes, even Joanna Krupa might find herself pressed into the defence of the Polish soul.