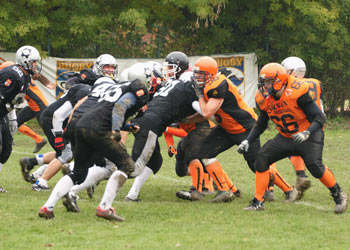 Twenty years ago most Americans would just laugh at the prospect of having a professional league of soccer in the U.S. Nowadays, Major League Soccer attracts considerable money and audiences and seems to have embedded itself deeply in the American sports landscape. Ten or even five years ago, most Poles would also laugh at the idea of playing American football in Poland. Would it be a surprise to know that there are already thousands of devoted fans and players throughout the country?

The PLFA (Polska Liga Futbolu Amerykańskiego – Polish League of American Football) is a professional sports association managing the contests between 22 teams from all over the country, divided into leagues one and two. There are two teams from Krakow amongst those 22 as well: the Sioux Krakow Tigers and the Krakow Knights. This year has definitely been the Tigers’ year. After playing two seasons in the lower division, with a thrilling end of the current one, the Tigers are back on track and will play against the best Polish teams in 2010.

The Krakow Tigers were founded in 2006, along with the other team from our city – the Knights. From the very beginning, the Tigers associated themselves with the western part of Krakow, having their first historical training on the Błonia common. Upon the start of the actual competition, they chose Juvenia stadium as their home ground and have been faithful to that choice for over three years. 2009 was a special year for the Tigers. First, they were given an honorary patronage from the American General Consulate in Krakow. Secondly, the Sioux restaurant became the main sponsor for the team. Last but not least, with new players and more resources, the Tigers were finally given a chance to turn the tables and start winning. After a disastrous season in the first league in 2008, the team was forced to fight its way back up. This fight was more than successful; the Tigers have literally crushed their opponents, winning all main season and play-off matches. Then, in late October, came the clash with the Steelers, a Silesian team also eager to get to Division One. Despite continuous support from an over 1,000-strong crowd at the Juvenia grounds and a very good first half of the match, the team from Krakow ultimately lost 20:27. Their last chance to get to play amongst the best teams in Poland came two weeks later. The last team of Division One, the Lowlanders, came to Krakow for a play-off with the Tigers. After a terrific and exciting match, the Lowlanders were beaten 30:14. Finally, a team from Krakow could celebrate and relieve the pain of losing the final against the Steelers. This time, the Tigers’ excellent supporters and their loud “Let’s go Tigers, let’s go!” worked.

A notable part of the success is owed to the Americans who helped to shape the team for the 2009 season. Coach Hesskew helped Michał Truszkowski, the Tigers’ founder, president and regular coach, to train the team for the big fight. Jeremy Woodall, who has played football at the university level in the U.S., also turned out to be way more than just an addition to the team. They worked with all the Polish members of the team, turning it into a collective capable of beating anyone.

American football seems to be becoming increasingly popular in Poland. Matches attract bigger crowds than ever and the players, coaches and supporters are very optimistic about the prospects for the future. Let’s just hope that the Sioux Krakow Tigers will train hard and we will be able to see them winning in the 2010 season – which, by the way, should start somewhere around April. Who knows, maybe you will become a fan yourself? I strongly recommend you get acquainted with the team at the first opportunity – after all, we may be speaking about the future champions of Poland!