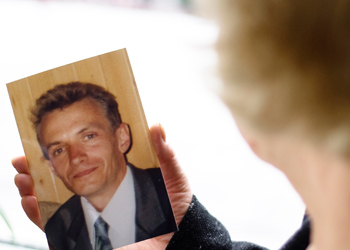 Wiktoria Polak’s 45 year-old son, Artur, left his Nowa Huta home on 7 January 2009 and has not returned since. Mrs. Polak has been searching for him to no avail. Artur is one of more than 15,000 people that go missing in Poland every year. Kinga Siembab from ITAKA – The Centre for Missing Persons, a Polish NGO that searches for people like Artur, says, “This is on a huge scale. It’s as if every year some small town disappears.”

Statistically, Poland’s situation, in which roughly one in every 2,500 people go missing every year, does not seem so bad. By comparison, in Australia it is roughly one in every 700, one in 300 in the United Kingdom, while in the U.S., where over 800,000 people go missing every year, about one in 400. However, the difference is the level of success in solving cases. In Australia and the U.K., for example, about 99 percent of cases are solved. According to Agnieszka Hamelusz, a spokesperson for the Main Police Headquarters in Warsaw, the Polish police close only about 70 percent of cases every year.

There are various reasons why people go missing. According to ITAKA, they include simply getting lost, running away, escaping problems, starting a new life, carelessness, crime (kidnapping, murder, human trafficking, forced labour or prostitution) and suicide. Quite often, illnesses like Alzheimer’s play a big role, as does depression and injuries leading to loss of memory.

Mrs. Polak has no idea what happened to her son. “It’s a mystery,” she says. By her account, on 7 January Artur suddenly told his mother that he would be starting a new job. That same day he drove her to work and told her that someone had called him about buying an old car he had. When Mrs. Polak later called Artur from work and asked if he would pick her up, he said maybe. She called him after work but he did not answer. She took the bus home and on the way received a message from her grandson, Artur’s son, saying that Artur had gone to Poznań, where his ex-wife lives. But he never returned, and Mrs. Polak noticed that he had not packed any things. According to Mrs. Polak, after some time had passed, her grandson started telling her that Artur had gone to Holland to work, and insisted that he kept in touch with him, but that Artur didn’t want to talk to her, and she shouldn’t worry about him.

What kind of system is set up in Poland to deal with missing persons? According to Katarzyna Padło, a spokesperson for the Krakow police, when a family member reports someone missing, all the relevant information is registered in a database. Every officer in the country can check that database to see if someone they come across is reported missing. The registering officer then compares the information against other databases, including the unidentified remains database. Next, “searchers” try to determine as many details as possible by checking places and people the person had contact with, analysing their phone billing, and so on. Fingerprint and DNA databases are at their disposal. Upon the family’s request, the police can also have the media broadcast an announcement.

That is the official protocol. The reality is often different. After looking for her son for nearly a month, Mrs. Polak contacted the police on 13 February to report him missing. The police spoke to Mrs. Polak’s grandson, who maintained that he had contact with Artur and that he would be returning in March. So, there was no need to worry, they said. But, when Artur still hadn’t turned up in April, they finally registered him missing.

According to Mrs. Polak, the police then talked to Artur’s contacts. They questioned the man he was supposed to have met to sell his car, but apparently that produced no further leads. They spoke to the grandson again, but that also led nowhere. By her account, they did not trace the location of Artur’s cell phone, even though Mrs. Polak called police headquarters in Warsaw and the telecom company herself about it. She says that they only checked the phone billing after Mrs. Polak asked them to, and it took months. In July, Artur’s car was found in Nowa Huta. Mrs. Polak wanted the police to search it for fingerprints, but she says they just broke in, looked around, and left it there. The officer responsible for the case calls Mrs. Polak periodically to ask her if she has any more information from her grandson.

Katarzyna Padło from the Krakow police said that based on information she attained from the officers searching for Artur, Mrs. Polak reported her son missing on 17 April, and they do not know whom from the police she could have talked to prior to that. They say they contacted the border patrol and notified authorities abroad about the case. An inspection of the car was also carried out and evidence was secured. The case is ongoing.

Artur Polak’s disappearance demonstrates the discrepancy between police protocol and the peculiarities that can emerge in any given case. A key factor is that there is a lack of resources. According to Ms. Siembab, most police headquarters only have one or two people searching for missing persons. “Unfortunately, they don’t have ten arms each,” she says. There is also no central DNA database, making it very difficult to compare DNA from bodies found in different places, resulting in many unidentified remains. Siembab says that for the time being there is “no chance” for a central DNA database at police level, as there are simply no funds. That is why ITAKA is currently trying to start up such a database in cooperation with the police and the government.

There is also a general lack of organization and coordination between institutions. Siembab says that there have been cases where missing persons were lying at the Institute of Forensic Medicine in Warsaw as unidentified remains. However, when families contact the Institute to ask if any of the bodies fit their family members’ descriptions, they receive no answer. She also recalls situations in which a young prosecutor simply compared descriptions of unidentified remains from old files to pictures on ITAKA’s website, and they matched.

Then there are formal, legal and procedural roadblocks. Police divide missing persons into two categories. The first one includes children below the age of 15, seniors, and people who are sick and need medical attention, or are suicidal. The second one includes adults and multiple runaways. For the first category, the police should search intensively and use all the resources at their disposal. But for the second category they just register the case and an orderly officer proceeds as they see fit. Since being missing is not a crime, and therefore not a high priority, the police are rarely able to set a large campaign in motion at the drop of a hat. For example, they did not force Mrs. Polak’s grandson to prove that he had contact with his father. “These things are the same everywhere,” says Siembab, “there is a structure, a hierarchy, a policeman is below another policeman, and he can’t, like [ITAKA] for example, pick up the phone and do something because he has to take the formal path.” All of this means that when an adult goes missing, the family is effectively on its own.

There is ITAKA, however, the only NGO in Poland searching for missing persons. Founded in 1999, it consists of an interdisciplinary team of about 35 staff and volunteers, including psychologists, lawyers, social workers and journalists. They handle about 1,500 cases a year, and solve over 70 percent of them. ITAKA provides a 24-hours-a-day, seven-days-a-week support line – (0) 801 247 070 – and a separate line in case of missing children – 116 000 – one of a few of its kind worldwide. Its online missing and unidentified persons databases – located at zaginieni.pl – are accessible to the public in Polish and English, allowing users to actively contribute to a search.

ITAKA cooperates closely with the police, especially after they recently signed a formal agreement, which clearly defines what the police should and should not do. It allows ITAKA to ask the police what they have done regarding a case, making it easier to monitor their work. Siembab, who is a psychologist and “searcher” at ITAKA, recalls a call from a woman asking if she had talked to the police because they had suddenly started to act. Things are slowly changing for the better though, and Siembab says the police are becoming more involved. However, the cooperation is still working its way from top to bottom and it will take time for officers to trust ITAKA. For example, Mrs. Polak claims that the Krakow police never told her about ITAKA and said they never heard from them regarding Artur’s case, even though ITAKA told her they had contacted the police.

According to Siembab, ITAKA tries to fill gaps in the system by doing things the police cannot or do not do. For example, they arranged for posters of Artur Polak to be hung up in Polish stores in the UK, where they suspected he might be working. When another lead pointed to an address in Amsterdam, they asked the police there to investigate the location, although it turned out to be a restaurant, and Artur was not there. Mrs. Polak also attends a support group organized by ITAKA.

Recently, ITAKA arranged for Mrs. Polak to access the police’s unidentified remains database. One of the bodies was particularly decayed and unrecognisable. The height and hair type matched Artur’s. When Mrs. Polak told the police about the picture, they told her she should submit a DNA sample so they can check if it is Artur. But Mrs. Polak says, “I’m afraid to do it because I have simply lost faith in the police. I don’t want them to deceive me, to say, ‘Oh it’s over, we’ll stop searching, your son is dead.’”

With her son gone, Mrs. Polak is left alone. She would like Artur to at least let her know if he is alive. She wants him to know that she loves him and that she and his children are waiting for him. “It is something terrible to lose,” she says, “one child, one son.”

If anyone has any information regarding the whereabouts of Artur Polak, please contact the police, or Wiktoria Polak at +48 506 204 503, or contact ITAKA or the Krakow Post.