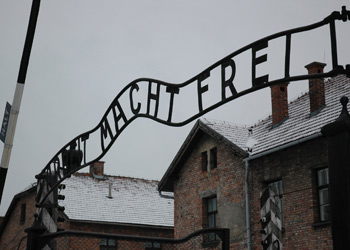 It was a cruelly ironic sign, “Arbeit Macht Frei” (“Work makes [you] free”), that greeted prisoners destined for the death camps at Auschwitz. Erected by the camp’s prisoners in 1940, the sign had hung at the entrance to the premises for almost 70 years – until it was stolen in the middle of the night on 18 December.

At 5 am that morning, an Auschwitz Museum security guard called the Małopolska police to report the theft. A short-lived frenzy followed, as international media outlets turned their attention to the infamous Nazi death camp, while local police frantically searched for traces of the sign. Three days later, the sign was unearthed by the police in northern Poland, crudely cut into three pieces and missing an “I”. Thanks to a tip-off to the police, five Polish men, aged 20 to 39, were arrested, but the crime had yet to be solved.

So what happened in Auschwitz? In an attempt to answer this question, Małopolska police brought three of the suspects who had confessed back to the scene of the crime on 22 December to re-enact the theft. They showed investigators how they unscrewed one end of the sign and tore the other end off, and then dragged the five-metre, 30-kilogram metal landmark to their vehicle. Unable to fit the sign in its entirety in their car, the suspects proceeded to cut it into three pieces, still at the camp, losing the “I” from “Frei” in the process, which was later recovered at the scene.

Meanwhile, more evidence began to surface that the five men involved in the theft were simply hired hands performing a job. They have been profiled as common criminals, all possessing police records of theft or assault, and their motives are financial rather than political. Judging from their actions, they were amateurs as well: after failing to bring the right tools to remove the sign initially, they had to leave the camp and visit a local hardware shop in neighbouring Oświęcim. They also failed to bring a vehicle long enough to carry the sign in its entirety. Police confirmed the media’s speculations: “The main person behind this crime was somebody living outside Poland who does not hold Polish citizenship,” prosecutor Artur Wrona stated at a press conference held that day.

Two days later, allegations that a Swedish neo-Nazi gang had commissioned the theft began to surface in the Swedish press. An unnamed source told Swedish daily Aftonbladet, “We had a person who was ready to pay millions for the sign”. The source stated that the money was meant to be used to fund an attack on the home of Swedish Prime Minister Fredrik Reinfeldt and on the Swedish Foreign Ministry. Additional attacks on Parliament members were also mentioned.

According to Aftonbladet, the source also stated: “The sign was to be delivered to Sweden, since it was here the deal should be made. My role was to find a buyer. We had a person who was willing to pay millions but he had no political agenda. These things have a huge collector value… The biggest collectors are from England, the United States and France.” The Polish men were to be paid about $17,000 for their role. Two of the five men were arrested in Gdynia, at a port where ferries to Sweden depart.

On 30 December, Inspector Dariusz Nowak of the Małopolska police department told the Krakow Post that with the recovery of the sign, the police have now done all they can and the matter is in the hands of the prosecutor’s office. At the time of print, the Polish prosecutor had requested the help of Swedish authorities in the investigation.

The theft has also pointed out huge shortcomings in the museum’s security. Małopolska police prosecutor Artur Wrona accused the Auschwitz Museum authorities of negligence: “Our investigation showed the thieves returned to the scene several times during the night. The first time they didn’t have proper tools with them to unscrew it. The security was not working properly.” Despite four of the museum’s security guards being on duty during the theft, the thieves escaped unhindered and were not caught on the camp’s surveillance.

The Cultural Ministry responded quickly to the allegations, and Culture Minister Bogdan Zdrojewski stated late on the 23rd that the Polish government will contribute 400,000 złoty towards the camp’s security. The museum guards that were on duty have been suspended and other museum employees may also face consequences.

The men behind the sign’s theft face 10 years in prison for their actions. They are being held in Krakow.

Museum officials have stated that they hope to restore the sign and return it to its rightful place by 27 January, to mark the 65th anniversary of the camp’s liberation by the Allied Forces. At the moment, a replica of the sign hangs in its place.

2 thoughts on “What Happened in Auschwitz?”