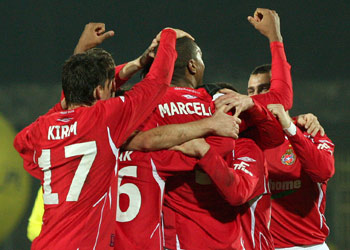 In the dying weeks of 2009, football dominated the sports pages once more, both on a national, continental and international level, for both current and anticipated matches. We saw decisions being made in the Polish Ekstraklasa, the World Cup draw, the Champions League and Europa League, the World Championship for club teams and the election of the FIFA World Player of the Year 2009.

Despite a heavy offensive by main rivals Legia Warszawa and Lech Poznań, the “White Stars”, currently playing their home games in Sosnowiec, maintained a lead of five and eight points, respectively. After the surprising defeat against arch rivals Cracovia at the end of November, this month Wisła bounced back with a 3-1 away win at Odra Wodzisław and another 3-1 away win against title contenders Ruch Chorzów, who seem to have forgotten about Wisła Krakow. The team leading the Ekstraklasa finished off 2009 with a 1-0 home win against Zagłębie Lubin.

Cracovia’s win over Wisła gave the team wings, stringing together a streak of four wins. Although the last match before the winter break was lost to Lechia Gdańsk (1-0), the team pulled itself well out of relegation worries into ninth position. During the last playing round of the Ekstraklasa in 2009, Robert Lewandowski (Lech Poznań) surpassed Andrzej Niedzielan (Ruch Chorzów) as the league’s top scorer, with nine goals.

Wisła Krakow now leads with 40 points, followed by Legia Warszawa with 35 and Lech Poznań and Ruch Chorzów, each with 32. The Polish Ekstraklasa resumes on Sunday, 28 February 2010.

Liverpool and Juventus out of Champions League

The group stages in the European tournaments ended with two big surprises. Former Champions League winners Juventus (2003) and Liverpool (2005) did not survived and fell back to the Europa League. Juventus held good odds at home against German side FC Bayern, but the visitors, coached by Louis van Gaal, pulled off a stunning performance, winning 4-1 in Turin. Liverpool was already out after having failed to beat Olympique Lyon, making their away win against Hungarian champions Debrecen merely a statistic.

The good news is that some phenomenal matches were drawn for the knock-out stages. In the Champions League, defending champions FC Barcelona face VfB Stuttgart from Germany. While Barça is expected to have an easy ride, it seems that the odds are against the Italian teams for the quarter finals: Italian champions Inter will have to deal with Chelsea, while AC Milan face off with Manchester United. Another promising clash is that between Arsenal and FC Porto.

In the Europa League, Liverpool will face another side that has fallen back out of the Champions League, Romanian champions Unirea. Juventus face off with historical rival Ajax Amsterdam, while defending champions Shakhtar Donetsk from the Ukraine are going to have to deal with Fulham from England.

Ukraine has green light for EURO 2012

It was “do or die” for Ukraine this December. But UEFA President Michel Platini was satisfied by the progress made and convinced all will be done in time in order to hold a good Euro 2012 tournament in both Poland and Ukraine. Warsaw will have the opening game and Kiev will have the final. The decision means that Krakow now definitely will not hold any matches during Euro 2012, though it is expected that the referees of the tournament will set up camp in the southern Polish city. Draws for the Euro 2012 qualification groups will be held 7 February 2010 in Warsaw.

FC Barcelona have won all six prizes available to a club team in one calendar year, which was only preceded by Ajax Amsterdam in 1972 (although technically they needed a result in January 1973 to conclude that same string). Winning the national cup, the national league, the European Champions League, the national Super Cup, the European Super Cup and now the World Cup for Club teams, Barcelona have confirmed they are simply the world’s best team at the moment. A tough battle against Argentinian side Estudiantes saw the South American team pull ahead in the first half and Pedro equalizing in the second on behalf of Barcelona. Lionel Messi scored the all-deciding goal in extra time, concluding Barcelona’s amazing run in 2009, under rookie coach Josip ‘Pep’ Guardiola.

Lionel Messi and Barcelona seized some other trophies afterwards. Lionel Messi was crowned FIFA World Player of the Year 2009, an election where all national coaches and national team captains (Franciszek Smuda and Mariusz Lewandowski on behalf of Poland) could cast their top three. And overall, the top three resulted in Barcelona players only: Messi won the vote, but fellow teammates Xavi and Andres Iniesta came in second and third. The award for most beautiful goal was won by Cristiano Ronaldo, with a phenomenal strike for Manchester United in the quarter final away game against FC Porto in the 2008/09 season.