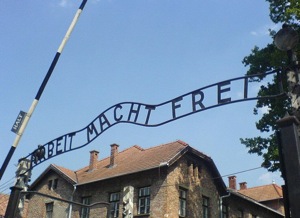 Polish police have recovered the “Arbeit Macht Frei” sign, which was stolen from the Auschwitz Museum in Oświęcim on Friday morning.

Police spokeswoman Katarzyna Padło told the Krakow Post at 1 am Monday morning that five people have been arrested in connection with the theft.

UPDATE: Police are holding five men between the ages of 25 and 39 in custody. They have released a statement saying that the suspected men have no ties to neo-Nazis groups, and the theft does not appear to have been politically motivated. The men have been taken to Krakow for questioning.

The sign was found in the north of Poland at night on Sunday, 20 December. The five-metre sign has been cut into three pieces, each containing one of the famous words, “Arbeit Macht Frei”. However, according to the AP, Auschwitz Museum spokeman Paweł Sawicki has said that the museum authorities hope to repair the sign and return it to its place as soon as possible.

UPDATE 2: Gazeta Wyborcza has published a video of the arrival of the suspects and the sign’s recovery:

Image: The sign at the entrance to Auschwitz / Courtesy Neil