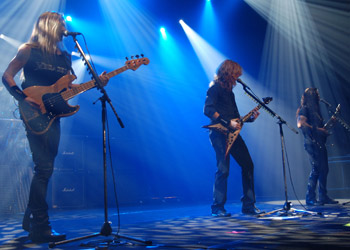 For the first time in history, the four bands that brought the thrash metal genre to great heights and basically kept heavy metal alive in the last decades will play on one stage, at one venue. Sonisphere Festival will travel across Central Europe in the late spring and early summer of 2010, with Metallica, Slayer, Megadeth and Anthrax as main acts. On 16 June 2010 the whole tour kicks of in Warsaw, giving the country’s capital the honour of hosting the first time “The Big Four” play together on the same stage.

The world wide web has been abound with speculation on a possible Big Four tour for several years. Now, it has been revealed that Metallica, Slayer, Megadeth and Anthrax will play together for the first time in history, in a move that will have metalheads across the globe frenzied with excitement. “Who would have thought that more than 25 years after its inception, thrash metal’s Big Four would not only still be around and more popular than ever, but will now play together for the first time… what a mindf**k! Bring it on!”, says drummer Lars Ulrich on behalf of Metallica.
“It’s about f***ing time this happened,” declares Slayer’s guitarist Kerry King. “And about time the fans finally get what they want. This is f**king awesome!”

Anthrax guitarist Scott Ian agrees, commenting on the enormity of the announcement. “People have been talking about these four bands playing together since 1984. That’s 26 years of expectation! And the thing is, I believe not only will we live up to the expectations, we will shatter them! No other four bands as influential as the four of us have ever done this.

“Imagine if The Beatles, The Rolling Stones, The Who and Led Zeppelin had played together? Or Black Sabbath, Judas Priest, Iron Maiden, and Motörhead? Well, I may be getting into some rarefied air here but as a fan, that’s how big I feel this is.”

These four legendary acts broke out of the underground thrash movement to dominate the metal world in the 1980s, selling millions of records and packing arenas across the globe. The metal giants have never before all shared the same stage, despite huge demand. But on 16 June, the four most legendary acts in their genre will take to the Sonisphere stage at Bemowo Airport to make the dreams of headbangers the world over become a reality. A second Big Four appearance is planned in Zurich, Switzerland two days later and a third on 19 June in Prague, Czech Republic. The Swiss show already has other metal giants confirmed such as Motörhead and Mastodon.

“This is a once-in-a-lifetime opportunity for heavy metal fans to see the four greatest heavy metal bands in American history back together on one stage,” concludes Megadeath main man Dave Mustaine. “If there are any heads left at the end of this festival that haven’t banged, they don’t belong there.”