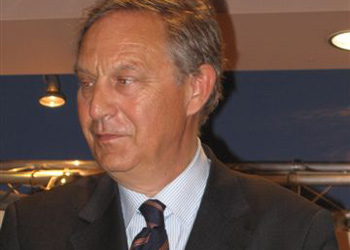 Until this week, Krzysztof Piesiewicz was best known for his work with famed Polish director Krzysztof Kieslowski. A lawyer and screenwriter, Piesiewicz had worked on some of Kieslowski’s most notable films, including The Double Life of Véronique and the Three Colours trilogy, as well as The Decalogue, a 10-part series on the 10 commandments that Piesiewicz set into motion. Most notably during his law career, Piesiewicz assisted in the successful prosecution of the murderers of anti-communist priest Jerzy Popiełuszko. After 1989, Piesiewicz went on to serve several terms in the Polish Senate. In 2007, he was elected to the senate for the fifth time, as a member of the Citizen’s Platform (PO) party.

However, after this week it seems that not only is the senator’s political career over, but he will likely be remembered for his deeds in this century rather than the previous one. This week, the Polish tabloid Super Express published a video on their website showing the 64-year-old politician in drag, allegedly snorting cocaine with prostitutes.

The video shows Piesiewicz appearing to inhale a white powder, while being surrounded by women later identified as prostitutes. Afterwards, he is shown lying in bed unconscious in a women’s dress, with one of the women applying make-up to his face.

The senator claims that he was blackmailed by the prostitutes who appear in the video. He says the white powder is medicine, and not cocaine. Meanwhile, the women claim that the video was an act of revenge on Piesiewicz, as he had promised to find jobs for them. They were allegedly blackmailing him for half a million złoty in order to keep the tape out of the public’s eye.

According to Piesiewicz, he had met twice with the women and paid them an undisclosed amount. When they asked for more money, he went to the Prosecutor’s Office. The police have stated that he was a victim of an illegal group that extorts large sums of money from celebrities through blackmail. The women involved have also been arrested.

However, the senator has asked that his immunity from prosecution be removed. If convicted on drug possession charges, Piesiewicz could serve up to eight years in prison.