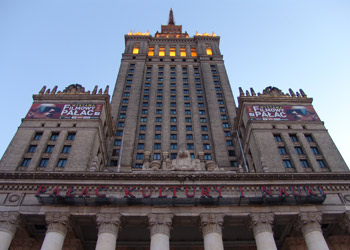 The debate surrounding Radosław Sikorski’s suggestion that Warsaw’s Palace of Culture and Science (PKiN) should be demolished as a symbolic act to match the dismantling of the Berlin Wall in 1989 is a hypothetical one. The simple truth is that it will never happen. The cost of knocking the PKiN down and replacing it with something else would hugely outweigh the cost of simply renovating the thing. Perhaps Poland’s blood was hot enough to do it 20 years ago, but not today, and certainly not at massive cost. If anything I am inclined to believe the race to save the PKiN as a much-loved national monument has just begun, while the race to destroy it never got started.

The story of the Warsaw’s long-lost Alexander Nevsky Cathedral is an illuminating parallel to the argument over the PKiN. This is not the first time Poland has regained its independence after a period of detested Russian rule. It happened in 1918 when the founding of the Second Polish Republic ended more than a century of Russian domination over the east of the country. The Alexander Nevsky Cathedral was a Russian Orthodox cathedral built by the imperial Russian authorities in the centre of Warsaw between 1894 and 1912. When completed it was the tallest building in Warsaw and widely regarded by Poles as a symbol of Russian oppression, just like the PKiN 40 years later. The cathedral was torn down in the mid-1920s.

The cathedral stood in the centre of what is now Piłsudski Square, the huge open space where John Paul II memorably held mass in 1979. When the square isn’t being used to host earthshakingly historical events, which is 99 percent of the time, it’s an unfriendly place. Far too big to act as a genuine urban square, it is shunned by pedestrians and lends a desolate empty air to that part of town. Imagine how spectacular it would look if the grand cathedral was still there. I don’t believe a single Varsovian would look upon it with ire now, a hundred years after it was built. Even more depressingly, the fragmentary ruins of the Saxon Palace, razed by Nazis in 1944, line one edge of the square. Haven’t we left behind the times when flattening buildings out of spite was normal behaviour? Isn’t it, in short, just a barbaric thing to do?

I suspect Sikorski’s suggestion was an easy way to annoy Russia rather than a serious policy proposal. No Pole I’ve spoken to has the slightest ill feeling towards the building. For most of them it invokes nostalgic childhood memories. Everybody knows it was built by the Russians and everybody knows it was built as a symbol of Russian mastery, but that’s not what it is now.

In the 1920s, as the destruction of the Alexander Nevsky Cathedral was underway, an Orthodox member of the Polish Senate had this to say: “…demolished, it would be a symbol, a shameful symbol of intolerance and chauvinism!… the foreigners come—Americans, British—and gaze surprised, and take pictures and distribute these pictures all over the world, naturally with an opinion about Polish culture and civilization…” How would Poland feel if video of the PKiN being dynamited were showing on CNN?

One thought on “Opinion: Save the Palace of Culture and Science”