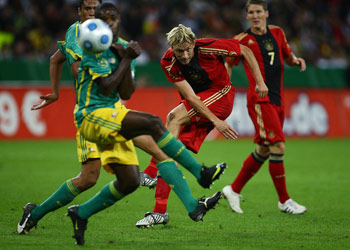 December 4th saw an exciting draw in the 2010 FIFA World Cup tournament; the nineteenth in total and the first on African soil. Several celebrities such as South African movie star Charlize Theron, one of Africa’s most popular and successful athletes ever, Haile Gebreselassie, and football star David Beckham drew 32 competing teams into eight groups, each with four teams. Groups A, D and G are so evenly matched, they could be classified as “groups of death”.

In Group A, hosting nation South Africa will have a tough nut to crack with top notch teams such as Mexico and France, but also dangerous outsider Uruguay. France got into the tournament by a decisive goal prepared by Thierry Henry’s hand. Protests from opponent Ireland were in vain, but France was set back out of the pot of top countries, as FIFA decided that the play-off results should not count: it moved France out and The Netherlands into the “top” pot.

The result is a group that consist of very evenly matched teams. The same can be said for Group D, which is headed by Germany. They face Australia – the first team to qualify for the 2010 World Cup – Ghana, currently regarded as Africa’s strongest team, together with the Ivory Coast and Serbia, who had a splendid qualifying run. All teams are considered as having fair chances to advance to the knock-out stages.

But the biggest clash in the group stages will be that of Brazil and Portugal in Group G. Ivory Coast will also play in this group, alongside the unknown side of DPR Korea (or North Korea). The Koreans will attend the World Cup for a second time after their début in 1966. In that year, Portugal managed to eliminate Brazil in the group stages, while the North Koreans knocked out reigning world champions Italy. Portugal and North Korea faced each other in the quarter-finals, where the Koreans took a dashing 3-0 lead. Under leadership of the legendary Eusebio, Portugal fought back to take the game, winning 5-3. Thus, a group with World Cup history and a so-called “group of death”.

Now again Italy is reigning world champion. In Group F they will start against New Zealand, Paraguay and Slovakia, the team responsible for the elimination of Poland. With such opponents, it is expected that Italy easily will advance as group stage winner. They will meet with a team from Group E: Denmark, Japan, Cameroon or The Netherlands, who gave Italy a good thrashing at Euro 2008, beating them 3-0. At Euro 2008, the title eventually ended up in Spain, who now head Group H, where they’ll meet Honduras, Chilli and Switzerland.

The first ball picked by David Beckham had his own team of England inside. Later on the English team was paired with the country of Beckham’s current employer, the United States of America. Other countries are Algeria and Slovenia. The English are expected to have an easy run in the early days of the tournament.

Just as Group G brings back memories of 1966, Group B will see a lot of 1994 games replayed. Like 1994, when the tournament was held in the United States, Argentina, Greece and Nigeria have been drawn into one group. Back then, Argentinian key player Diego Maradona was expelled for usage of cocaine, Nigeria was the surprising group winner, while Greece failed to score a single goal or point. Now Maradona is head coach of Argentina, Greece achieved international status with the Euro 2004 and Nigeria is now a household name in the World Cup. South Korea is Asia’s strongest team over the last decades and with Argentina in doubtable form, this group might just end up a thriller as well.