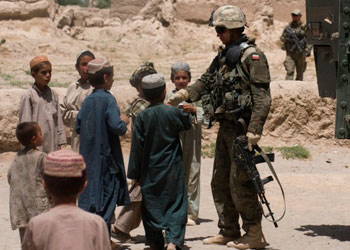 Poland is to send 600 extra troops to Afghanistan in the spring, following a phone conversation regarding a new Afghanistan strategy between U.S. President Barack Obama and Poland’s Prime Minister Donald Tusk.

During their conversation, which took place on Tuesday, Obama asked Poland to send more troops to Afghanistan. The extra troops will bring Poland’s total in Afghanistan, where they are in charge of the Ghazni province, to 2,600, with 400 in reserve. Defence Minister Bogdan Klich said the extra troops will take part in combat, reconnaissance, and the training of Afghani soldiers.

Tusk called the troop increase “an investment in Poland’s security,” while Minister of Foreign Affairs Radosław Sikorski said the decision is to “help Afghanistan enter the right path – the path Iraq is already on.”

According to the Associated Press, Sikorski also said, “We still believe that we should give the Afghan government one more additional chance.”

There had previously been rumors that Poland is to send more troops to Afghanistan in the spring. In October, the new U.S. Ambassador to Poland, Lee Feinstein, was in the midst of diplomatic confusion after claiming that Polish leaders decided to “enhance” their presence in Afghanistan, something Poland denied at the time.

But, it now appears that Poland’s decision to send more troops had indeed already been planned, and as Gazeta Wyborcza points out, it should not be interpreted as a result of Obama’s phone call to Tusk.

President Lech Kaczyński still needs to approve the troop increase. Deputy Chief of the Bureau of National Security Witold Waszczykowski told RMF radio that approval is probable, although the president is waiting for a proper justification for the increase.

Obama is seeking support for his new strategy in Afghanistan. On Tuesday he announced that the U.S. will send about 30,000 more troops, bringing its total to almost 100,000.

In other Afghanistan news, on Thursday the Polish Press Agency reported that an Mi-24 helicopter belonging to the Polish Army crashed during an emergency landing next to the Ghazni army base just after take-off, but none of the seven soldiers on board were injured.