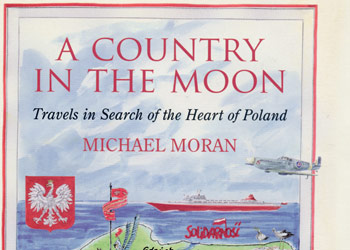 An obsession with Chopin, a motley crew of Brits abroad and a madcap car rally in a dilapidated Rolls form the backdrop to Michael Moran’s A Country in the Moon, an outsider’s reflections on Poland during its early nineties capitalist labour pains.

Everything’s up for grabs in Moran’s Poland as he touches down in a bleak Warsaw and heads for a “training centre” to begin work as a customer services trainer to commie-hardened Poles. Diligently, he embarks on his task. “How do you deal with customer relations?” queries Moran to a room full of Polish managers. “When a customer rings me and I speak to him, he never rings again,” beams a lady to a chorus of approval.

Moran is neither Polish nor a bona fide trainer, but rather the nephew of a Chopin-obsessed pianist who extracts a deathbed pledge from his nephew to visit the composer’s birth country. Moran takes us on a roller-coaster ride through the heart and soul of its people and places as he encounters their illogical obsession with bureaucracy – getting his car insured means photographing every nut and bolt – and he observes that when you have a problem Poles are wonderful; it’s only when you don’t that no one knows what to do.

With the training centre disintegrating faster than pierogi at boiling point – “If you’re worried about that contract you can sign it at the end” reassures his boss – Moran hits the Polish potholes to take part in a car rally. While beautifully chronicling many fables and anecdotes along the way, it’s here that the narrative feels too much like a reading from an encyclopaedia, and it’s sometimes tricky to tell your Dukes of Mazovia from your King Zygmunts. Still, his observations are charming, from the tradition of Easter bread styled as cockerels and crabs, to paying homage to the under-recognised heroic involvement of Polish airmen during the Battle of Britain.

A Country in the Moon discovers a sincere people mourning a bloody past perched at a chaotic, contradictory historical junction – yet always armed with a shot of the good stuff to see them through the worst.