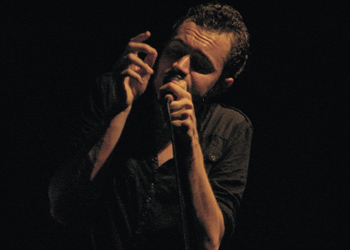 The Editors, it seems, have no sense of doubt in what they could achieve. On the release of The Back Room in 2005, the Birmingham four-piece were instantly catapulted from relative obscurity to the status of UK indie darlings, and even made ripples stateside – perhaps that year only Franz Ferdinand were hyped comparably. Four years on, and another two albums down the line, The Editors are still going strong; they are in Studio Club tonight to promote their new album In This Light and On This Evening, which has been described as “darker and more synthetic” than their previous material, and which noticeably sports a heavier electronic feel than second album An End Has a Start. The band are also here to shoot video footage for their new single “You Don’t Know Love”; well-known Kazimierz haunt Alchemia had been chosen as a suitably gloomy location, along with various spots along the Planty. Habitually compared to the likes of Joy Division, Echo and the Bunnymen and Interpol, mainly due to lead singer Tom Smith’s deep baritone voice and the perceived “darkness” of the material, the band themselves have baulked at such suggestions, but such comparisons are not entirely unfounded, and Krakow provides a suitable backdrop for this evening’s synthesized introspection.

Following a gutsy and energetic support slot from Brighton band The Maccabees, The Editors strode onto the stage to huge applause, with the crowd already well and truly onside. The band launched into title track of In This Light…, Smith’s sonorous voice intoning “I swear to god, I heard the earth inhale moments before it spat its rain down on me” – a foreboding portent of what was to come, lyrically and stylistically. The band have mainly eschewed their trusty guitars for retro electronics on their third album, and as they worked their way through the set, the sense of cavernous dread created by their wall of synthesizers was reminiscent of Violator-era Depeche Mode – much to the delight of this young crowd. The sound of the moment, it seems. New single “You Don’t Know Love” pulses along pleasingly, followed by “The Big Exit”, a slice of monochrome melancholy, and “The Boxer”, a Donnie Darkoish nightmare vision that only shares the same title as the Simon and Garfunkel classic: “This place is our prison, it sells the past / Damn this place, it makes a boy out of me” succinctly sums it up. The Kraftwerk-inspired groove of “Bricks and Mortar” provided a bit of relief with its optimistic refrain “I hope life is good for you” being one of the few moments that Smith has looked beyond the dark side on this album.

The graveyard murk was briefly lifted by the ghostly anthemic synths – a kind of sped up “Decades” on Prozac. The Editor’s debt to Joy Division is no secret, and while there are worse things to be compared to, such labelling has been done for bands of lesser ilk. The Editors seem to be made of strong stuff however, and one can sense a band who have the ambition to move into the U2 league, having never hidden their liking for the soaring and anthemic. A few songs from the first two albums were sprinkled amongst the promotion of the new material – “Blood”, “Bullets”, “The Racing Rats”, “Smokers Outside the Hospital” and the magnificent “Escape the Nest”, all proving that the band have sufficient songs in their canon to please audiences for some time yet. The latter’s “The nights are longer now than ever before / But now you see the lights of the town”; an appropriate lyric for these brief autumnal days. Despite the pervading gloom, the crowd went wild for every song, and there seemed to be an instant bond; Smith lurched with increasing abandon as the night progressed, as guitarist Chris Urbanowicz slunk around the stage, punching out guitar riffs effortlessly. Ed Lay’s measured, regimental drumming was also faultless. The sound resonated around Studio as Smith launched himself with vigour at his keyboard, arms and legs flailing: an impressive and slightly unexpected performance, given the overall tone created by the sombre lighting and lugubrious lyrics.

Despite, or perhaps because of, the obliqueness of Smith’s words, the crowd was loving his every utterance. In fact, there seemed to be a certain coy optimism behind what he said, a kind of reassuring hand in the dark. A 20-song set ended after about 90 minutes on a high: firstly a down-tempo version of “Walk the Fleet Road”, perhaps The Editor’s “Munich”, whose refrain “People are fragile things, you should know by now / Be careful what you put them through” had the audience in raptures, and current single “Papillon”, with its twitchy bass line and lyrics declaring, “Darling, don’t put down your guns yet / if there really was a God here, he’d have raised a hand by now”, as good a way as any to finish this black celebration. Kicks like a sleep twitch? You’d better believe it. Krakow’s gig of the year? In this light, on this evening, it seemed so.